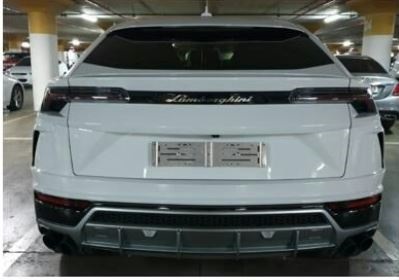 Earlier this week, Team Trio Task Force took to social media with a BOLO (be on the lookout) post for a stolen white Lamborghini  Urus. The post also advertised a R200 000 reward for any information about the car.

Cars get stolen on a daily basis but when it's something as unique as a Lamborghini SUV, of which there are only a few handful in the country, and even less in our neighbouring states - it sticks out like a very sore thumb. The missing Urus is now a very hot car and it will only be a matter of time before it will hopefully be found because whoever has it, is a sitting duck. And, should it be spotted anywhere, people are urged to contact the authorities as soon as possible.

The starting price for an Urus is from R3.4-million for the base model.

According to Anton Koen from No Jack Vehicle Tracking, this is the second incident which has taken place in Bedfordview, in the East Rand, while there are also another two unconfirmed reports of another two vehicles. The first vehicle is said to be a yellow Urus.

Since the message has been posted to Koen's Facebook profile, he has received numerous calls from outside SA of people saying the Urus has been spotted in Mozambique. There have also been pictures to verify these claims.However, these intelligent fraudsters are not just targeting Lamborghini owners, they are after all luxury vehicles such as Range Rover Sport, Porsches, BMWs, Mercedes-Benz', and even Toyota Hilux bakkies.

Koen says owners need to be vigilant because this syndicate has implemented a very smart modus operandi: "These guys make themselves familiar with the dealerships, and the staff who work there. They obtain customer information, possibly by access to the Natis system, or keeping a watch on customers who visit showroom floors."

Koen further adds that these same suspects then make a call to the owner and make as if they are from a dealership and mention names of staff, they then claim the vehicle needs to be booked in for a service due to a recall. They tell the owners that a flatbed will come and pick up their vehicle since they are not allowed to drive it with the fault."

Wheels24's Janine Van der Post says: "Luxury vehicle owners need to be extremely vigilant. Make sure you call the dealership and make absolutely sure there is a recall, however, most times automakers will send out mass communication or notify owners in a more official manner. And, just to be safe, call another dealership even if it's in another province to confirm if there is a recall or fault on the models.

"Always make sure you always ask for official identification, or take their picture if you need to and of the tow truck/flatbed."

Various manufacturers have been warning owners of this fraud syndicate since last year.