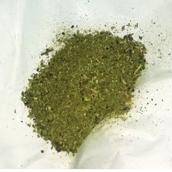 Grace Mathole 'baths' with this muthi before poking.

NOT only did she poke one or two of her daughter’s exes, but she went after six of them – including a sex buddy.

And she said she did it to take care of her family.

Daily Sun published Nomalanga Mathole’s story on 11 February. The 27-year-old from Kagiso in Mogale City said she wanted her mum to stop poking her exes.

But Grace said a sangoma told her to do it as it would help to revive her businesses.

The 51-year-old mum said things became bad after her husband died in 2007.

Two of her supermarkets closed down, along with her restaurant and salon. Grace said she looked for a job, but was unlucky for seven years. So she consulted a sangoma.

“The sangoma only wanted a R2 500 once-off payment. She made it clear she won’t make me rich, but will help me revive and keep my businesses.” She said the sangoma instructed her to bath with the muthi and apply it before poking her daughter’s exes.

“I stole my daughter’s phone and looked for her ex’s number. I felt very bad and lied when she found out.

“I told her I had no idea this was the guy she had told me about,” said Grace.

MY MUM DATES MY EXES!

Nomalanga Mathole wants her mum to stop poking all her exes. THEY had a beautiful relationship and she trusted her mum more than anyone else. But now their relationship has been ruined. . . HER MUM POKES HER EXES! READ: STUDENT HITS R5BN NSFAS 'JACKPOT'!

She said one of her supermarkets started booming after she poked the first ex.

“I wanted to stop, but also wanted my other businesses back. The sangoma told me my businesses would go away if I stopped poking the exes.”

She said her businesses were doing well so far.

Nomalanga said: “I would be lying if I said I have forgiven my mother. She should have at least told me.

“We were best friends. She needs to stop and find other ways of making money if she values our relationship,” said Nomalanga.

He said he asked Grace to stop and would help her find a way to keep her businesses.

Grace’s sister-in-law, Priscilla (54), said she noticed her businesses were coming back to life, but didn’t question it.

Sangoma Khokhovula Gundabaloyi said he had dealt with people in Grace’s shoes and could cleanse her.