WHERE’S MINE: Makhadzi says she’s been working hard and needs to be paid. Photo by Aaron Dube.

IN HER hit song Matorokisi, Makhadzi refuses to work for free.

She claimed she’s worked like a slave in December – and received very little for it.

SHE’S BEEN SEEN ON VIDEO PLEADING FOR PETROL MONEY!

Despite being fully booked for the festive season and her song playing on radio stations, the Limpopo-born artist claimed she was broke.

On Monday she pleaded on Facebook for her money from her manager, Rita Dee Nephawe.

In one of her posts, Makhadzi writes that she buys on credit as she has no money.

She claimed her manager disappears and switches off her phone when she has to pay her. 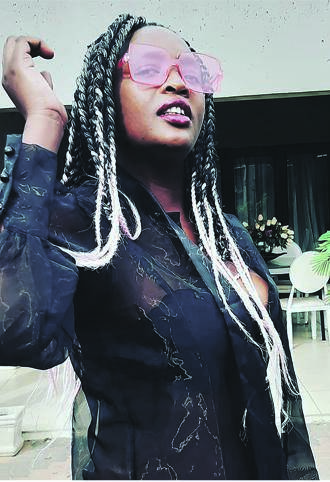 NOT SO: Makhadzi's manager, Rita Dee Nephawe, tried to clear things up by posting her version of events on Facebook (above right). Photo from Facebook

“I wanted to buy something today. I promised a seller I’d pay in an hour’s time because I knew my manager had switched off her phone but would soon get back to me,” she wrote on Facebook.

She said she once waited for her money outside a shop until the store closed.

Makhadzi told Daily Sun she was owed money by her manager. She said she took to Facebook as a last resort.

“I’m hurting. On paper I have money, but in reality I can’t get hold of the money. I’m broke because someone is holding my money,” she said.

She insisted though that she didn’t want to change managers. “We’ve been working together for a long time. She needs me and I need her.

“She just has to change the way she handles finances. I’m lucky I’m surrounded by supportive people. It’s hard being broke when people see my face on TV and festivals around the country. Some days I feel like crying the whole day.”

Makhadzi said all her agreements with Rita Dee were verbal.

Makhadzi said they agreed she’d be paid 75% of the money made per gig, while 25% would go to the manager or the management company.

“I never signed anything. Whenever I asked for a contract, she’d say she’d send it,” she said.

From Tuesday afternoon, the #SaveMakhadzi was trending with celebrities and ordinary people commenting.

@Tumisole on Twitter offered her legal help: “I spoke to Makhadzi. We will be linking her up with attorneys who will assist her at no charge.”

@Ntsikimazwai wrote: “Dear, artist. Your account details on the invoice, not your manager’s. You pay the manager, not the other way round.

Daily Sun tried to phone the manager for two days but her phone was off and her mailbox full.

The situation was explained by a man who phoned the People’s Paper yesterday. He introduced himself only as Rita’s friend Moses, and said she couldn’t comment because she was stressed and scared because after Makhadzi’s Facebook post, some people threatened to burn down her house and kill her.

“Strangers are calling her and demanding that she pay Makhadzi. Her mailbox is full, she has been sent threatening messages,” he said.

“Makhadzi was paid and Rita will soon address these rumours,” he said.

Daily Sun has seen proof of payment bearing an FNB letterhead and indicating a payment of R150 000 was paid on 19 December and another R150 000 on 4 January.

Rita Dee told Limpopo-based Capricorn FM on Wednesday she, too, had been battling to get hold of Makhadzi and denied owing her.

“I spoke to her relative after days of not being able to reach her.

“Right now we’ll sit with management and our legal team to decide the way forward.”