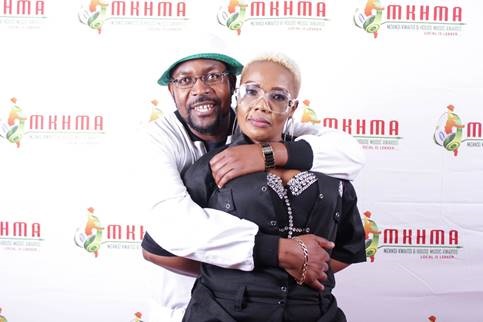 The late Thulani Malinga and his wife, Perfecta Malinga who recently tested positive for Covid-19.

THE Mzansi Kwaito and House Awards lost its managing director Wiseman Malinga two weeks ago, who died of complications with Covid-19.

Now the awards’ CEO and founder has tested positive of the coronavirus.

Dineo Malinga, who is also the wife of the late Wiseman, is in quarantine.

According to the awards spokesman, Mondli Mlauza, Dineo tested positive after she buried her husband.

“She wants to protect her family from being infected. She’s a strong woman and we believe she’ll recover and go back to work,” said Mondli.

He said that Dineo wished for privacy as she’s also still mourning the death of her husband.

In a statement, Mondli said that Dineo has temporarily stepped down from her duties and appointed the acting managing director, Sboniso Dlamini.

He further revealed that after Wiseman’s death, the organisers are struggling to get sponsors for the awards.

“Organisers of the self-funded award ceremony are deeply concerned as it gets even harder for them to obtain sponsors to fund the annual music event, more especially after Wiseman’s death, and in this current pandemic, we face an even bigger problem,” said Mondli.

He said Dineo’s wish is to not only award the winners with trophies, but with cash as well to boost them as many are struggling because of the pandemic.