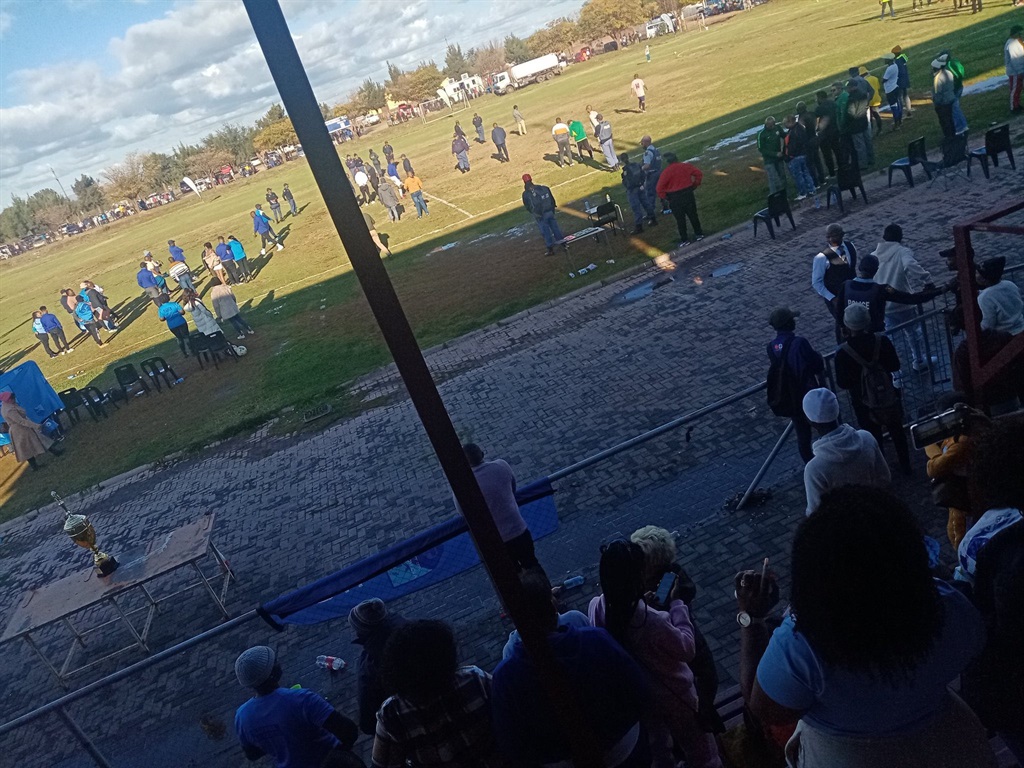 AN ABC Motsepe League referee, Lionel Bergman, was badly injured apparently by irate Upington City FC fans who stormed the pitch like a swarm of bees in their Northern Cape playoffs league match against Real Madrid played at a neutral venue in Postmasburg on Sunday.

In a video that SunSport saw, match officials, more especially Bergman, were attacked by fans who invaded the pitch in protest of an allowed winning goal, which fans argued was a hand ball, and allowed by the referee.

People who were at the stadium, said there was a free kick that was awarded to Madrid, and from a resultant kick, the ball apparently hit the back of the net, with about 13 minutes to go.

Irate soccer fans stormed the pitch to assault match referee and his assistants who were accused of having allowed a goal they reckon a 'hand of god' was used in important play-offs. #ABCMotsepeLeague pic.twitter.com/nX8iv48Snz

It is understood the controversial goal was Madrid's third, as both teams were at the time tied 2-all, which would have meant Madrid were on course to win the match and qualify for the national play-offs.

According to our mole on the ground, the referee was rushed to the Postmasburg police station where he had to open a police case of assault, and it's unclear whether his assistants and match commissioner were also attacked in the fracas.

"It was an ugly scene which saw the referee running for his life while his assistants were also running for cover," said our source.

"The referee had a cut on his mouth and was kicked multiple times by the angry mob. The players, from both clubs, were left shocked and helpless." However, a livid City coach Thulani Nkosi, challenged all those who are blaming their "fans" that they are responsible for the ugly incident.

"How do they conclude that they were our fans? We brought about 10 fans - who were relatives of the players and came in a minibus," pointed out Nkosi about the match being the regional decider for a team that would represent Northern Cape in national play-offs.

"We don't have supporters' members, and we came with a big police escort of about 15 officers, as all clubs were responsible for their own security. And the police demarcated the players' area where fans aren't allowed to cross to ensure we were safe.

"Worse, our 10 supporters were ladies. We found a large number of supporters at the stadium. How do you tell they supported us? I think those fans were fed up as the referee was terrible and offered shocking goals to Madrid, even the famous 'Maradona hand-of-god' was better.

"They also brought match officials from Kimberley, and none from Upington, why? All regions used national referees who would have been neutral too. There was no fairness."

With the match not having been played to its fullest regulated time, Nkosi said they are now waiting for Safa to clear the matter and the way forward.

"We need direction. Safa must make a decision," added Nkosi.

According to reports, the match had its own controversies before it even started, as it is reported that Upington had a Stream A case pending after they won their case against Northern Professionals FC who challenged in court for an ineligible player on 29 January in a match against Olifantshoek Young Tigers.