ZONDO: There was no reason to arrest Adv Teffo in court 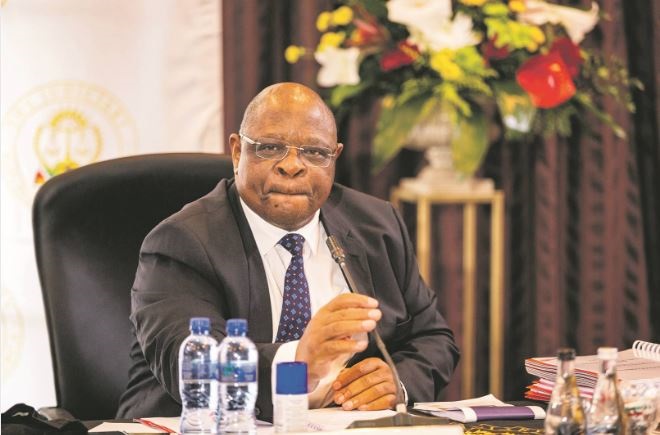 "There was no justifiable reason why the SAPS could not have waited for Adv Teffo to leave the Courtroom and the Court premises before they could arrest him."

This was said by Chief Justice Raymond Zondo, after he was asked to comment on the arrest of Advocate Malesela Teffo inside the North Gauteng High Court in Tshwane on Thursday (28 April).

Teffo was arrested in the courtroom in which he appeared as Defence Counsel representing four of the accused in the Senzo Meyiwa murder trial.

Zondo made it clear that the arrest of anybody, let alone a legal practitioner, inside a courtroom, is completely unacceptable and should not have happened.

He said in this regard it should be remembered that this was the same courtroom in which Adv Teffo appeared to represent his clients. The Chief Justice said: " As I understand the position, the warrant of arrest had been issued about two months earlier and waiting until Adv Teffo had left the Court premises would not have made any difference."

"Adv Teffo was not going to spend the evening in the Courtroom," he said.

Zondo said the conduct of the SAPS in effecting the arrest inside the Courtroom and the manner in which the arrest was effected on a legal practitioner and, therefore, on an officer of the

Court, was an assault on the dignity of the Court and the Judiciary.

"An officer of the Court was arrested in a manner that was unacceptable and showed disrespect for the Judiciary. Section 165(4) of the Constitution places an obligation on all organs of state, including the SAPS, through legislative and other measures, to assist and protect the Courts to ensure the independence, impartiality, dignity, accessibility and effectiveness of the Courts, " he said.

Meanwhile, Teffo appeared in the Hillbrow magistrate’s court on Friday morning (29 April) on charges of common assault and trespassing and was released on bail of R10,000.

It is alleged that he assaulted a police officer after entering the Gauteng headquarters of the police in contravention of a court order.

Teffo will be back in the same court on May 27.

Related Links
WATCH LIVE: Adv Teffo in court
Top cop: Advocate Teffo ‘MOERED’ a female cop and failed to appear in court!
Next on Daily Sun
Our mkhukhu too small for tlof tlof!

Listen now!
Voting Booth
What do you do when you have Load Shedding?
Please select an option Oops! Something went wrong, please try again later.
Watch movies/series on my phone
12% - 37 votes
Spend time with my family
17% - 53 votes
Sleep
48% - 148 votes
Household chores
9% - 27 votes
Eat
1% - 2 votes
Play outside
1% - 4 votes
Leave the house and find something to do
12% - 36 votes
Previous Results
Let us know what you think