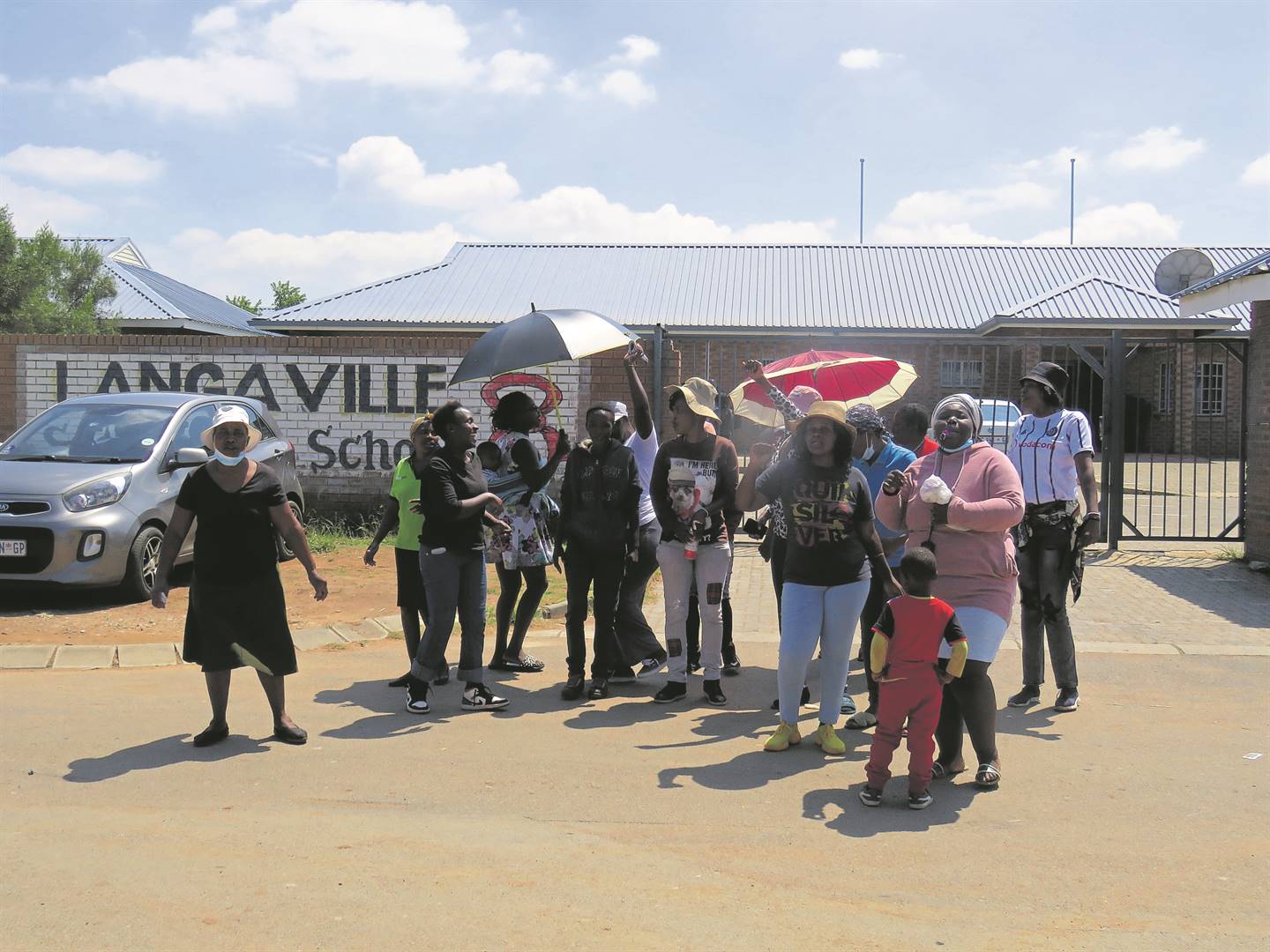 Parents at Langaville Secondary School demanded they be given permission to perform rituals and pray to chase evil spirits out of the school. Photo by Ntebatse Masipa

SINCE the start of 2022, an alarming number of schools across Mzansi have been affected by unusual and strange spiritual occurrences.

And parents, teachers, community members and the Department of Basic Education have been left puzzled by these unexplained happenings.

Recently, pupils from Modilati Secondary School in Stinkwater in Hammanskraal, Tshwane could be seen jumping around, claiming they were being touched by something unseen.

A parent told Daily Sun that her child said she saw something like a monster falling from the school’s ceiling and it grabbed her by her feet.

“This is terrifying and we want the school to allow traditional healers to deal with this matter for the sake of our children,” she said.

Angry parents at Langaville claimed the principal wouldn’t allow them to pray during assembly at the school. Photo by Ntebatse Masipa

Theledi Pule, school governing body chairman, said they don’t know what could have caused this and they were forced to send all pupils home.

Parents, traditional healers and pastors were at Modilati Secondary School in Stinkwater, Hammanskraal in Tshwane after seven pupils were hallucinating and showing signs of spiritual manifestations on Friday, 25 February. Photo by ­ Raymond Morare

“Parents have decided to hold prayer sessions on weekends and if the situation doesn’t change, they will approach the department to find out if there are other ways to solve this situation,” she said.

The police were called after parents went to Modilati Secondary School in numbers to demand that a solution be found after seven pupils showed signs of spiritual manifestations. Photo byRaymond Morare

Traditional healer Fanyana Hlongwane said a thorough cleansing was needed as this was not the first time pupils acted as if they were possessed by demons.

He said it was mostly girls who were troubled by evil spirits. He said they saw things and described what they saw as a monster that grabbed their feet, causing them to jump all over.

He said Modilati secondary should give healers the go-ahead to consult with the ancestors to get a solution on how they could cast the evil spirits out of the school.

Hlongwane, who is chairman of Tshwane Ratshwana Dingaka Le Baporofeta Association, said the kids hallucinated before they fell. He said on Friday, 25 February, parents called them to help, but the department stopped them. “We need to do something for the sake of our kids,” he said.

The Gauteng Department of Education released a statement saying it was aware of several pupils who hallucinated and showed signs of spiritual manifestations.

The department said it will monitor the situation.

“Our Psych Social Team was dispatched to the school to offer necessary support to all affected. However, the mission never materialised as they could not access the school due to the disruptive behaviour by a few community members,” read the statement.

At Langaville, pupils mysteriously got sick and parents begged the principal to allow them to get a traditional healer to perform rituals at the school.

On Tuesday, 1 March, parents protested demanding they be given the right to pray and perform rituals at the school. The angry parents told Daily Sun the principal was not willing to be part of the process.

Parents claimed they demanded to be allowed in the school to pray during assembly. The parents claimed three kids died at the school since the beginning of the year. “We believe there are evil spirits which lead to kids being possessed and killing themselves,” said one parent.

Daily Sun contacted the principal about the allegations, but he referred the SunTeam to the Gauteng Department of Education.

Basic education spokesman Elijah Mhlanga said the department was aware of this incident. Mhlanga said: “We are baffled by the things that are happening in our schools. We usually call the police but they also don’t know what to do. This is a complex and serious matter that needs everyone to give a hand. These include religious groups, community members and everyone who can help us with this matter.”

He said that they will be working on a plan to find a solution. Mhlanga said they will also visit other affected schools, starting in KZN.

Counselling psychologist Maridian Mawelele said such events could leave those who are affected or have witnessed it to suffer from post-traumatic stress disorder (PTSD). She said such events have the potential to create stigma for those who had the attack or some pupils might be scared to go back to school.

“What will be helpful is an intervention at an early stage because trauma can be lingering and long-lasting. It can last months or years, so early intervention is key.

“This can be done in a one-on-one setting or a group setting, where they can share what they have experienced, especially if this attack affected a group of girls.”

She said that teachers were not exempt from this as they also witnessed the occurrence and it might traumatise them. She added that individuals may not necessarily be diagnosed with full symptoms of PTSD, but the event is equivalent to a traumatic experience which can have one or more symptoms of PTSD.

Counselling psychologist Tholinhlanhla Dlamini-Ngcoya said the cause of this happening should be established first to best know how to assist the kids.

“The department needs to ensure that psychological resources are put in place permanently, not just because of this situation. This can also cause a traumatic experience for the kids who went through this,” she said.