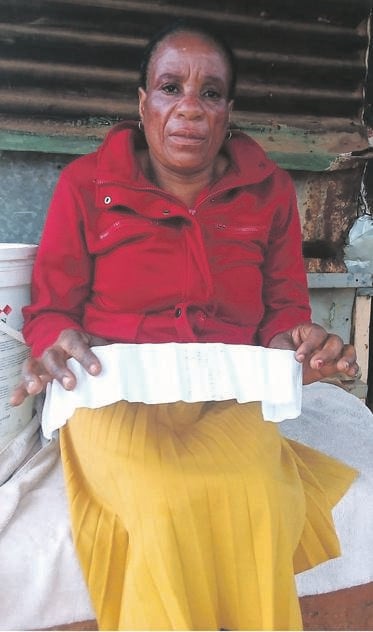 WORRIED: Takalani Tshikhudo claims her boyfriend is trying to scam her. Photo by Raymond Morare

SHE was over the moon and couldn’t believe her luck when she won R40 000 in a sports bet.

But her excitement turned to despair when she tried to cash it in.

Your ticket has been stolen, she was told.

“When I refused he told Sunbet my ticket was stolen,”

READ: 'I'M TAKING BACK MY CARVELA AND TV!'

She alleged she asked her boyfriend, Elias Mashabela, to make the bet for her at Sunbet in Menlyn on Wednesday, 24 February.

The 39-year-old from Amanda Park in Mamelodi, east of Tshwane, said she won but Elias allegedly wanted half of the winnings.

“When I refused he told Sunbet my ticket was stolen,” she said.

“I found this out when I went to cash in my winnings. They told me he reported my ticket as stolen.”

Takalani tried explaining that the ticket was hers, but they wouldn’t help her.

“They told me the person who has the right to claim the money is the one whose name the ticket is registered under,” she said.

She said she asked Elias to tell the truth, but he refused and fled their home.

“I’m now stuck with a ticket I can’t cash and the man I loved is responsible for this,” she said.

She regrets sending Elias to make the bet for her as he’s now using it to ruin her.

“I was going to share the money with him, but not give him half,” she said.

“He’s being greedy because I refused to share my money with him. He decided to sabotage me.”

When Daily Sun contacted Elias, he said it was all lies and that the People’s Paper would regret it if his name is ruined.

“Go ahead and publish the lies. I won’t say anything to you. Why must I talk to you?” he said.

Spokeswoman Enid Vikers said Sun International would look into the matter once it had Takalani’s details.

Listen now!
Voting Booth
What do you do when you have Load Shedding?
Please select an option Oops! Something went wrong, please try again later.
Watch movies/series on my phone
13% - 42 votes
Spend time with my family
16% - 53 votes
Sleep
48% - 157 votes
Household chores
9% - 28 votes
Eat
1% - 2 votes
Play outside
1% - 4 votes
Leave the house and find something to do
12% - 38 votes
Previous Results
Let us know what you think