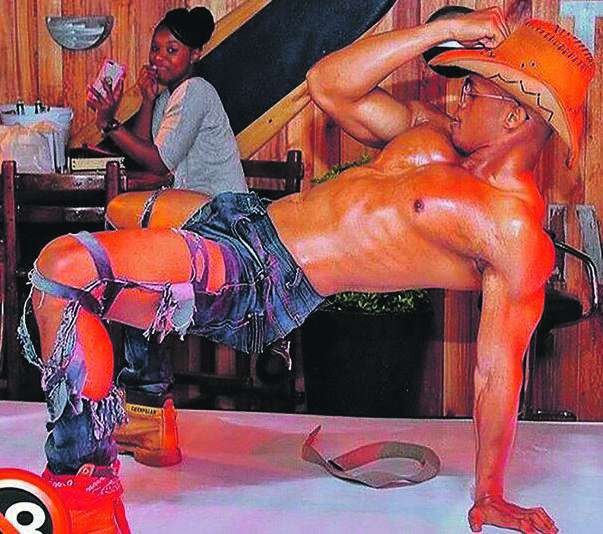 ARE YOU READY?: Nkosinathi Mphengane told Daily Sun older women are much more mature than the younger ladies.

GONE are the days when gogos waited at the back of the queue, so to speak, just to be in relationships.

Some of them aren’t even into men.

instead of waiting around, they’re now taking matters into their OWN hands.

And thanks to male strippers, all their needs are met!

A 62-year-old married gogo said her husband is always busy. She had no reason to have a nyatsi when she could just pay for a poke.

Siya Entertainer is open to working with older women because they're more matured than the younger ladies. Photo SuppliedPhoto by

“I don’t want complications in my marriage and this is how I’m keeping it strong,” she said.

Another gogo (69), who’s a retired teacher, said she had too many failed marriages and all she wanted was to be entertained without strings.

“I gave up on love a long time ago. I’m grateful for these exotic dancers,” she said.

A third gogo (63), who’s a retired nurse, said she was single, but didn’t want a relationship.

The gogos said they paid R100 for strip sessions and about R2 500 a night.

In fact, some of them prefer the older clientele to younger women.

He became a stripper in 2015 and used to entertain young ladies until one of them exposed him on Facebook after he refused to be in a relationship with her.

“This is when I decided to render my services to older women. I get paid well and there are no strings attached,” he said.

Keenan said he sometimes gets paid R2 000 a night.

Although he was sceptical at first, he took the risk and it has paid off.

“Some younger women have broken up my relationships and I’ve been open to working with older women since,” he said.

“I’ve only dealt with two older women, and they were both older than 60. It wasn’t easy, but they understood I’m not used to this yet.

“They didn’t even cut the price we had agreed on,” said Khutso.

He said younger women were a problem as they ended up having feelings for them.

“At some point I dated one lady because I was afraid she’d expose me to my family if I said no,” said Khutso.

He said rendering his services to older women was great.

“Even though younger ladies bring the vibe, noise and drama, being watched and complimented afterwards is great and that’s what older ladies do,” he said.

Another stripper who didn’t wish to be named said he was also sceptical at first, but realised that working with older women was so much better.

“I know sleeping with a woman who’s older than your mum sounds disgusting, but at least they’re mature and would never compromise their reputation for a poke,” he said.

He encouraged other strippers to consider rendering their services to older women.

“It’s a lot to deal with, I know. At some point I had to drink alcohol before I could go give my services, but I got used to it and I’m happy,” he said.