CHILLING LETTER: WHEN YOU READ THIS, I’LL BE DEAD! 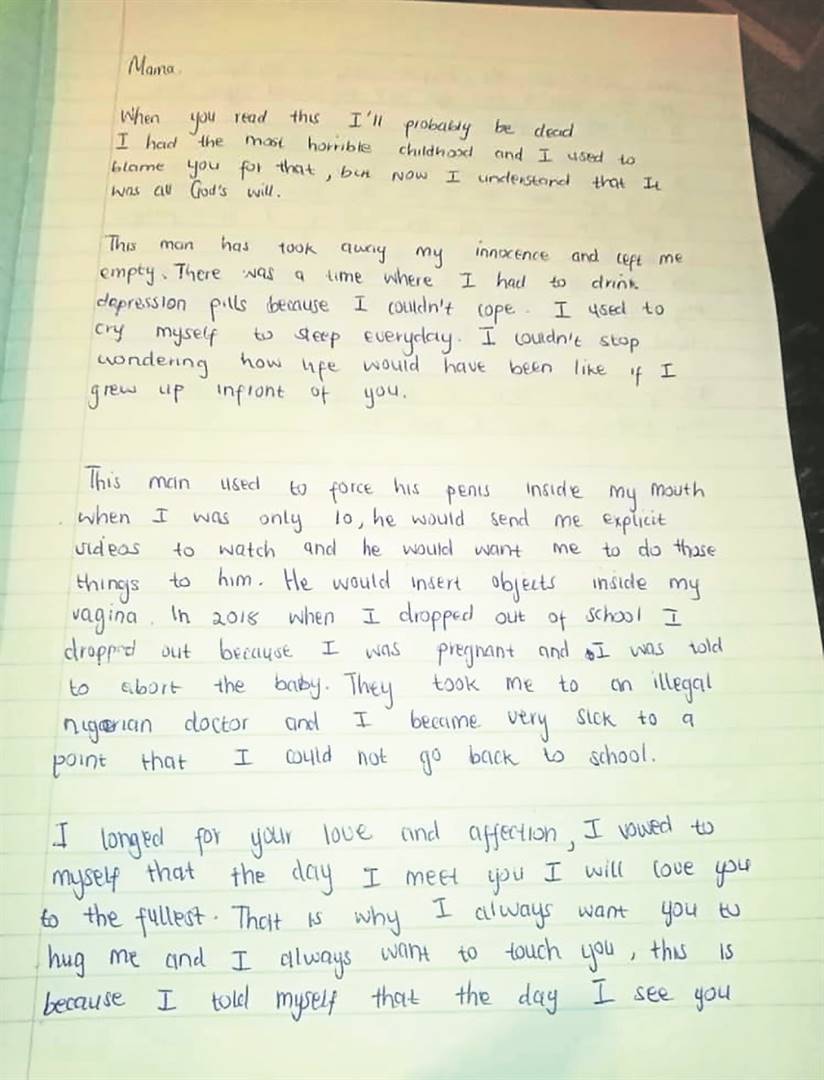 The letter the alleged rape victim wrote to her mum as to why she wants to kill herself.

A DEVASTATED mum fears her daughter will commit suicide.

The woman from Orange Farm, south of Joburg told Daily Sun she received a chilling letter from her daughter, who said she wanted to take her own life because her aunt’s husband raped her.

The woman said she left the girl with her mum when she was a baby due to financial troubles.

However, the gogo died in 2011 and her daughter went to live with her aunt.

The 18-year-old said her uncle started molesting her when she was only 10.

“In December, she ran away and decided to come and live with me.

“That was when I found out about everything they had put her through,” said the mum. PART 2: Daughter who was allegedly raped by her aunt's husband attempts suicide and details on why she wants to kill herself. Photo Supplied Photo by

She said the girl got pregnant when she was 17 and had an abortion at an illegal centre.

“This has left me broken and I regret taking my child to her gogo.

“I just want to see this man rot in jail,” said the mother.

The woman said they opened a case, but the uncle was still walking free.

“This is devastating as it’s one of the reasons my daughter wants to kill herself,” she said.

The woman said since her daughter ran away, the aunt has been demanding that she return to her home and stop telling people she was raped by her husband.

“She even asked my daughter to pay back all the money she spent raising her because she’s ungrateful,” said the mum.

“She knew about the rape and was enabling her husband.

“I’ve never seen such evil in my life.”

The mum pleaded with SunReaders to help her get counselling for the girl.

Gauteng police spokesman Lieutenant-Colonel Mavela Masondo said he didn’t understand why the man was not arrested and promised to take action.

Listen now!
Voting Booth
What do you do when you have Load Shedding?
Please select an option Oops! Something went wrong, please try again later.
Watch movies/series on my phone
12% - 35 votes
Spend time with my family
17% - 47 votes
Sleep
50% - 143 votes
Household chores
9% - 25 votes
Eat
0% - 1 votes
Play outside
1% - 4 votes
Leave the house and find something to do
10% - 29 votes
Previous Results
Let us know what you think