NEW XL6: FROM BLAND TO GRAND! 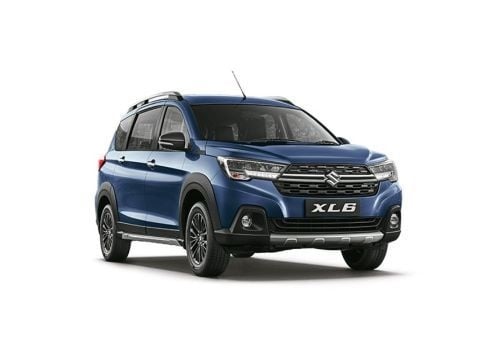 Suzuki has unveiled a striking new crossover, the XL6, which is basically based on the latest Ertiga compact people mover.

But it ditches the Ertiga’s bland styling in favour of a more muscular appearance. The XL6’s SUV-inspired styling is similar to rivals such as the Toyota Rush and Honda BR-V, while Suzuki refers to it as a premium MPV.

Suzuki has done a fair bit to differentiate the XL6 from the standard Ertiga, giving it a unique face with special features including a bold grille with a thick chrome bar crossing the Suzuki logo and redesigned headlights with LED daytime running lights.

The cladding flows through the side profile along the XL6’s wheel arches and wheelbase.

In addition to the rugged look are darkened 15-inch multi-spoke alloys and wing mirror caps also in black, and it comes with roof rails.

At the back the XL6 looks like the Ertiga, thanks to the L-shaped tail light clusters. Here, the lights aren’t just connected by a chrome strip but a black panel that houses the Suzuki logo.

On the inside, it’s similar to the Ertiga. The Ertiga is a seven-seater while the XL6 has six seats.

On the equipment segment, the XL6 comes with a 7,0-inch touchscreen infotainment centre that boasts Android Auto and Apple CarPlay, auto aircon, keyless entry with push start, and cruise control.

The XL6 is powered by the same 1,5-L naturally aspirated petrol engine as the Ertiga, which develops 78kW of power and 138Nm of torque.

Apparently, Suzuki South Africa is currently studying the possibility of bringing the XL6 to the country.