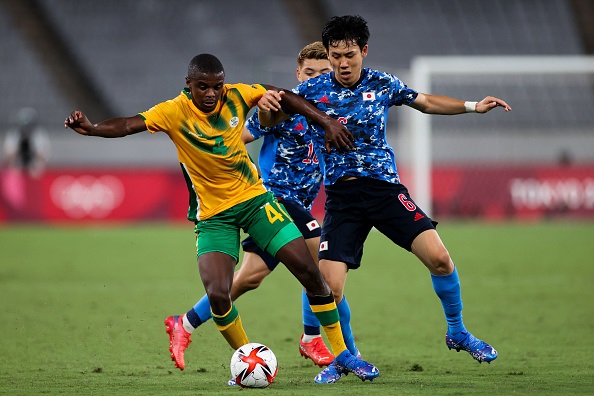 CHOFU, JAPAN - JULY 22: Endo Wataru #6 of Japan competes for the ball with Mokoena Teboho #4 of South Africa in the Mens First Round Group A match between Japan and South Africa during the Tokyo 2020 Olympic Games at Tokyo Stadium on July 22, 2021 in Chofu, Tokyo, Japan. (Photo by Zhizhao Wu/Getty Images).

SOUTH Africa's Olympic football coach hit out at "stigmatisation" of his Covid-hit squad, after they were forced to isolate before their 1-0 defeat to Japan on Thursday.

David Notoane said he had seen "people running away" from his team, after two players and a video analyst tested positive for the coronavirus on Sunday.

The SA lost their opening match of the tournament 1-0 to hosts Japan on Thursday.

Prior to the start of the games, Notoane was already dealt a blow as he was forced to withdraw five key players due to various medical reasons.

The team then had to quarantine, they only started training on Monday for the Thursday match.

"One thing that I think one has to mention is the issue of stigmatisation," Notoane said as per Sport24.

"Often, when people come across us, you see people running away. I think that's a little disrespectful."

Notoane refused to use the disruptions as an excuse, saying "rules are rules" and praising his players for their efforts.

But he also urged people to "treat us humanely".

"It's something that we would appreciate as a team," he said.

South Africa will now face France in their second group match on Sunday in a match that will determine their fate in the games.

Notoane and his charges need a win at all coast if they are to make it into the knockout of the tournament.