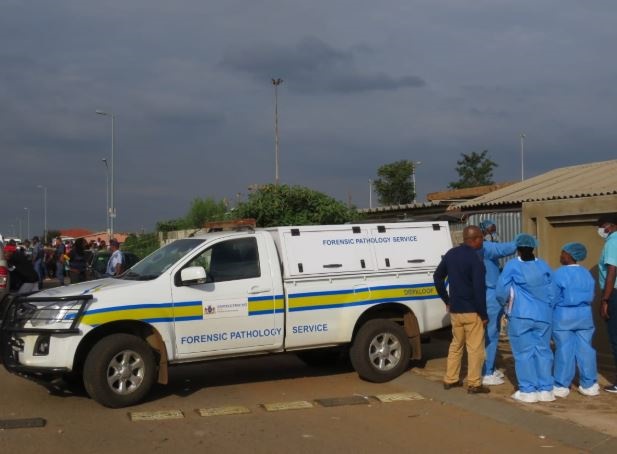 Forensic officials and cops at the scene. Photo by Zamokuhle Mdluli.

POLICE are on the hunt for a man who allegedly killed his girlfriend and hid her body under his bed.

Yesterday residents of Chiawelo in Soweto gathered as the body was found but also a shallow grave found in the yard where the suspect was renting out rooms.The woman was allegedly killed last Tuesday.

When they asked the man where was his woman was, he said she had gone to visit her relatives.

“When they fought, the guy had allegedly accused the girlfriend of sleeping with his friend. "They fought a lot and she left. When she returned, we thought they had solved their differences,” said a neighbour who didn’t want to be named.

She said when the fight started last Tuesday, they were shocked.

Residents shocked. A man dug up a hole to bury his girlfriend whom he kept under his bed for a week. The smell was becoming too much and he wanted story get rid of it. @dailysunsa pic.twitter.com/lLjKRhkWwC

“The fight went on for a long time and in the morning, the woman could not be seen. We thought she had packed her bags and left again,” she saidIt seems that the smell of the decomposing body forced the suspect to come up with a new plan which was the shallow grave behind the rooms.

He told his tenants there was going to be a ceremony and he needed to clean the yard.

Yesterday, the man came with a spade and started cutting grass.

He went behind the rooms and started digging.

However, his plan backfired.

Other people heard him and someone tipped off the cops.

A man slept in a room in #Chiawelo with a dead body of his girlfriend under the bed for a week. He dug up a hole yesterday behind the backrooms but was caught b4 burying it. He escaped before cops arrived. What a sick world we live in. @dailysunsa pic.twitter.com/Pyjr6woiVI

When cops arrived, he had already fled.

The rotten body of a woman was found under the bed and an open grave behind the rooms was found.

Residents of Chiawelo in Soweto were shocked to learn that there have been a dead woman for a week.

They came out on the streets to witness as police and the forensic officials loaded the body in a forensic van.

Police told Daily Sun that a case of murder was being investigated and that they were looking for the suspect. The tools the man used to dig a hole to bury his girlfriend. Photo by Zamokuhe Mdluli The hole that was dug up to bury the girlfriend. Photo by Zamokuhle Mdluli

Forensic officials and cops at the scene. Photo by Zamokuhle Mdluli

HOW OFTEN SHOULD A WOMAN HAVE SEX?
WIFE AND PASTOR POKED AT CHURCH!
'ANC IS A DEVIL'S FART!'
‘Zodwa called me a b**ch and shoved me around’
WATCH: TRUCK FLIES OFF A BRIDGE!
Pic Of The Day
Aug 13, 2020