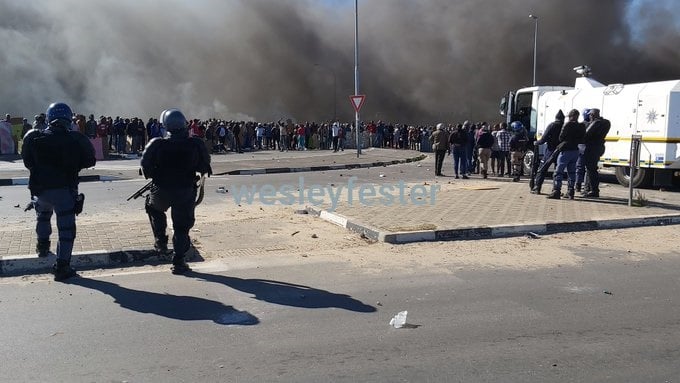 Protests have broke out in Kraaifontein in the Western Cape. (@TrafficSA, Twitter).

Protests have broken out in Kraaifontein in the Western Cape, as community members attempt to occupy land in the area.

Police officers have been deployed to a volatile protest, following an anti-land occupation operation at Bloekombos.

Provincial police spokesperson Colonel Andrè Traut confirmed that police officers were on site, to assist with the execution of an eviction notice.

"Our members have been deployed to Bloekombos in Kraaifontein this morning to maintain law and order during the execution of an eviction notice by the sheriff of the court," said Traut on Saturday.

However, the community began protest action against the evictions.

"The local community became riotous and the situation is currently being policed. No one has been arrested as yet. Our forces will remain in the area until tranquillity has been restored," said Traut.

According to EWN, more than 400 people had gathered on open land in Bloekombos and have been rebuilding shacks in the area after their structures were torn down by law enforcement last weekend.

The City referred News24 to the police for further queries.