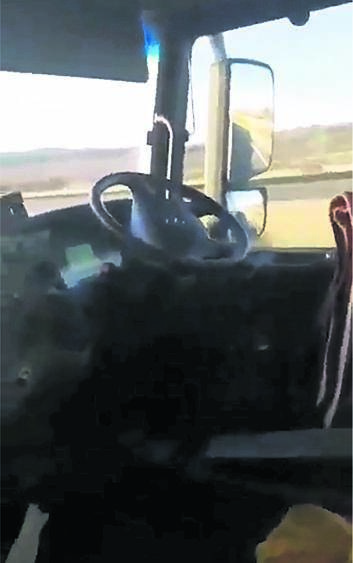 What appears to be an invisible, truck-driving tokoloshe in the video that went viral.

PEOPLE claim to have tokoloshes for various reasons.

One such person, a truck driver, alleges he has a tokoloshe that drives his truck for him.

A video of the driving tokoloshe recently surfaced on social media.

In the video, the truck is in motion but the driver’s seat is empty.

“Ngiyabonga, madoda. Yeyi! Kodwa akulula ukuyithola. Kufuneka uqine ephaketheni (the tokoloshe is a good driver. I’m sleeping while the tokoloshe in a mask keeps looking at me. Thank you, but it’s not easy to get one. You must have deep pockets).

A long-distance truck driver who used to deliver furniture told Daily Sun: “I had to drive the truck of a colleague, who was off-duty, from Joburg to Kroonstaad.

“I was driving with two assistants and sleepy. I guess we ended up dosing off.”

He claims he woke up at the delivery address and didn’t know which routes he took as he was fast asleep.

“When I asked the guys how we got here, they said they fell asleep before me and assumed I was the one driving.

“When I told my other colleagues about this, they said I wasn’t the first person to experience that and nobody wanted anything to do with that truck”

Sangomas said this practice has been going on for years and was a simple reminder they shouldn’t be taken for granted.

“This is what a lot of long-distance truck drivers do. They want to do a lot of trips and need help from ‘abafana’.

“I don’t support this practice. It ends up causing unnecessary accidents. Once the tokoloshe gets angry with its master, a war erupts on the road.”

Makhosi Maliyavuza said: “Government and some citizens take sangomas for granted. “They know what we can do and continue to test us. One day something big is going to happen.”