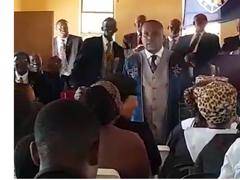 In this video, Reverend Bassie Jackals is seen preaching moments before he sat down and died during a church service in Kuruman, Northern Cape. .

THE church was packed like any other on Sunday.

And the reverend moved his congregants with his powerful sermon.

But no one thought this would be Reverend Bassie Jackals’ last sermon.

Reverend Jackals drew his last breath while preaching during a church service at African Methodist Episcopal Church in Kuruman, Northern Cape, on Sunday.

He sat on a chair while preaching and congregants thought it was part of the sermon.

When he fell to the ground, they clapped hands, thinking it was still an act. They thought he’d get up, but the reverend was no more.

In a video that did the rounds on social media, women wearing the church uniform can be seen rushing to help him. Social media users sent their condolences to Reverend Jackals’ family.

They said he was blessed because the Bible said: “Blessed are the dead who die in the Lord.”

When called for comment, Reverend Dimpho Gaobepe, told Daily Sun he was aware of the incident and was with Reverend Jackals’ family.

He said they were not ready to speak about the incident.

“We are still discussing a way forward. We don’t even know how the video got on social media.

“That alone has taken its toll on the family,” he said.