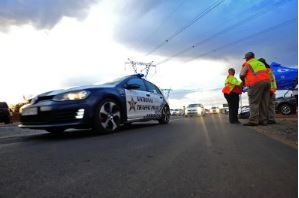 THREE suspects including a traffic cop were arrested for fraud.

Cops arrested the male traffic officer and two administration clerks in the early hours of Tuesday at Kirkwood Traffic Department in the Nelson Mandela Bay Metro.

The National Department of Transport, Crime Intelligence Unit members arrested the three suspects aged between 32 and 46 in Uitenhage.

According Police spokesperson Brigadier T Kinana investigations show that the arrested cop had been involved in fraudulent issuing of learners' and drivers’ licences.

“The period within which the alleged fraudulent activities had been taking place has not yet been determined. An audit will be conducted to establish the depths of these activities.”

Kinana said cases ranging from fraud, forgery, and corruption have been registered for further investigation.

“More arrests may not be ruled out, all the arrested suspects are currently in police custody and are expected to appear in Uitenhage Magistrate’s Court,” said Kinana.