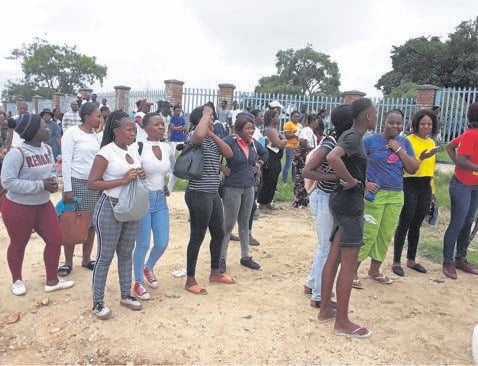 HUNDREDS of students hoping to register at Ehlanzeni TVET College’s Mapulaneng campus, near Bushbuckridge in Mpumalanga, had to run for cover on Tuesday.

This was after angry former students forced entry into the campus to help new students register despite limited space.

The drama unfolded on the second day of registration.

Public order police were called to calm the situation after stones were thrown.

“We want 70% of students to come from Bushbuckridge, but students from other areas also want to enrol,” he said.

“The community can’t claim to be instilling order while they don’t know the students’ issues.

“As former leaders in the Student Representative Council, we fought for service delivery, but this community is saying we’re mad.

“But now that projects have been approved on campus, they come to claim victory.”

Resident Lazarus Modipane said there were always student protests during this time of the year.

“We came together to prevent this from happening because our children suffer a lot.

“They leave for other places in search of quality education while we have a great institution around,” said Modipane.

College spokesman Mxolisi Nzimande told Daily Sun they won’t be pressurised by politicians, but would only accept the number of students set by the Department of Higher Education And Training.