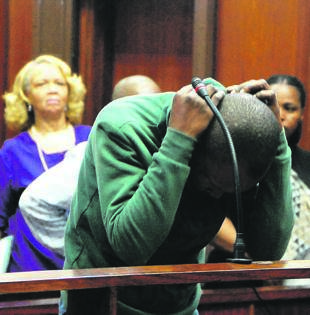 The 29-year-old was expected to apply for bail in the Durban Magistrates Court.

He was bust in KwaDabeka, west of Durban, last week and found in possession of the Durban University of Technology student’s cellphone.

He also had the knife and hammer allegedly used to kill Sandile.

Govender said the state would ask the court to sentence the accused to life in prison.

He said postmortem results showed the victim was hit with a hammer, which caused the injuries that eventually killed him.

The case was postponed to 27 November.

COMEDIAN BOBO BEATEN UP FOR BEING GAY!

When Mbutho entered the courtroom, his face was covered with a jacket.

His family was not in court, and neither were the students as they were writing exams.

Mbutho allegedly stabbed Sandile at the Steve Biko campus in September and took his laptop and cellphone.

The incident angered students and the university hired a private investigator, which led to Mbutho’s arrest.