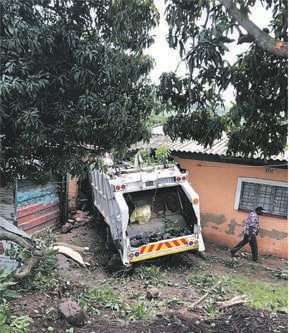 A truck veered off the road and crashed into a home in Buffelsdraai.

FIVE people from Buffelsdraai near Verulam, north of Durban, are in hospital nursing injuries.

This came after a truck full of rubbish crashed into a house on Wednesday.

Reaction Unit South Africa spokesman Prem Balram said four adults and a two-month-old baby were injured when the rubbish truck belonging to a private contractor veered off the road and crashed into the house.

“Reaction Unit South Africa received a call for help around 09:57am. Upon arrival, we found that three occupants of the home, the driver and a passenger had sustained injuries.

“They were all stabilised at the scene and transported to a local hospital.”

He said according to an eyewitness, the fully laden garbage truck failed to negotiate a hairpin bend.

The witness told him the truck then veered off the road, travelled down a steep embankment and crashed into the house.

Resident Jaishree Singh said: “Quite a few of these trucks drive recklessly because they drive past my home to get to the dumpsite and it’s a nightmare to pass them on your way to town. They drive like maniacs and don’t even care about the people who live here.”

From left: Kelly Khumalo and her sister Zandi. Photo from Instagram. THE Khumalo sisters have spoken out about the Senzo Meyiwa murder - but Mzansi people are not hearing any of it. On e.tv's Morning Show Kelly said: "People have already decided I'm guilty. Why must I defend myself?"

Another resident, Roshan Lil-Ruthan, said: “These drivers are reckless. I’ve been saying this for so long and it has been ignored. The authorities have been warned and again they have ignored this. They race on the R102 into Verulam and fly on Redcliffe Road to the dump.”

Daily Sun tried to get hold of the company without any success.