R780 A MONTH IS POCKET CHANGE! 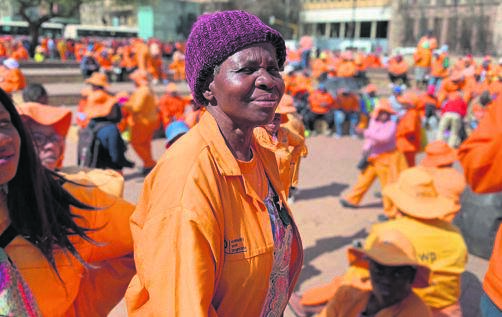 Alice Mokoena says the money she gets is not enough. Photo by Sthembiso Lebuso.

This is the question hundreds of Community Work Programme workers asked as they marched to the ANC’s headquarters in Luthuli House, Joburg, yesterday.

Alice Mokoena says the money she gets is not enough. Photo by Sthembiso Lebuso

Clad in their bright orange overalls, they demanded their wages be increased and for more work days to be added.

ANC’s Dakota Legoete received their memorandum and promised to get back to them soon.

“I take it on behalf of the ANC. We promise to get back to you within a suitable timeframe,” he said.

The programme was implemented in 2010 by the department of cooperative governance and traditional affairs as a safety net for unemployed people of a working age.

Unlike in the expanded public works programme, CWP workers don’t qualify for the R20-an-hour minimum wage.

One of the workers, Alice Mokoena (43), told Daily Sun they only received R780 a month.

“The money isn’t enough to sustain me and my four children. It’s not even a living wage,” she said.

Another worker, Johannes Moaketsi (31), said: “We work hard to ensure the province is clean but we earn peanuts.”

Kagiso Chutlane told the People’s Paper he suspected foul play by managers of the programme.

“I work full time as a scholar patroller, but come month-end I still get the same salary as those who work part time,” he said.

Both the department and the ANC could not be reached for comment.