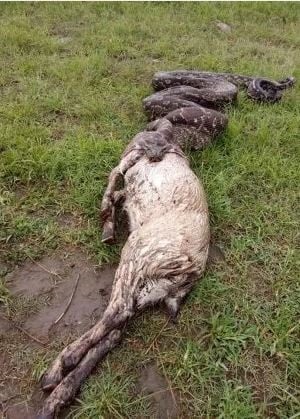 RESIDENTS of a village got the shock of their lives when they woke up to find a goat swallowed whole by a massive snake!

According to the Citizen quoting the Ladysmith Gazette, the community of Qinisa area in Esidakeni, Ladysmith found the huge snake near a goat’s kraal and it having feasted one of the four legged animals.

Snake expert Fanie Cilliers was called out to the scene and identified the snake as a massive Southern African Python.

“On arrival, he could see that the snake hadn’t moved far, as its belly was full. The entire goat was still inside it.”

“Fanie says the snake took over an hour to regurgitate the animal. After it was regurgitated, the goat was still safe for human consumption. However, Fanie explained that due to ancestral beliefs in the community, they did not want to even get close to the dead goat.”

He told the paper it was 213th Southern African Python he had removed from the area over the years, with this particular one measuring a whopping 4.6 metres.

The python was safely released at a local game reserve, where it will have an abundance of food.