POVERTY MADE ME A MAGOSHA! 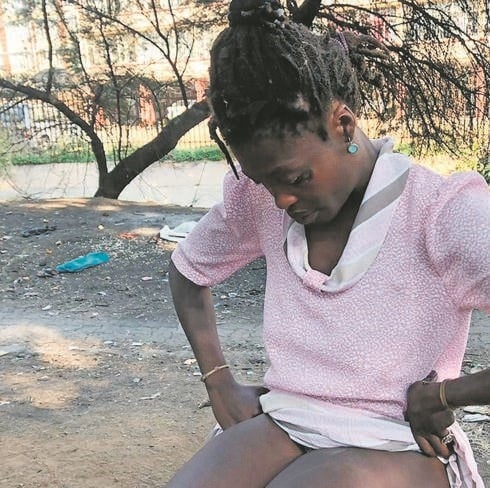 ALL she wants is to put food on the table.

And this is why she was forced to sell her punani.

I HAVE NO CHOICE, SHE ADMITS.

A nasty man took a video of her while servicing one of her clients.

In the video circulated on WhatsApp, she’s on top of a man.

She can be heard telling the person taking the video to stop.

But the man taking the video tells her to enjoy, and now Mzansi is shaming her. They don’t know how much she’s suffered.

But Lethabo Mazibuko said she’s not ashamed of her work as a magosha. She told Daily Sun selling her punani is her only way out of hardship.

“I’m just glad I can go to sleep on a full stomach. Everything happens for a reason,” she said.

The 28-year-old from Soshanguve, north of Tshwane, services her clients in the bushes in Sunnyside, Tshwane.

She told Daily Sun she’s been selling her body since 2007.

“After my stepmum died, her family wanted nothing to do with me. They threw me out of my late father’s house and I had nowhere to go,” she said.

She moved in with a friend who got tired of her and threw her out.

“I decided to live in shelters. I dropped out in grade 8. I couldn’t get a job anywhere, so I decided to sell my body,” she said.

She charges her clients R20 and more.

“They sometimes give me R70, which makes me very happy. They pay me before I sleep with them,” she said.

She has about eight regulars.

“They come once a week. I already know what they like and how they want it. This is my life and I’m used to it,” she said.

Growing up, Lethabo wanted to be a fashion designer or journalist.

“It breaks my heart that my life turned out like this,”

“But there’s nothing I can do as long as I make money. One day I’ll be someone in life.”

“It’s important to make the right choices and surround yourself with good company,” she said.

“I chose this life, but it’s not a good life. I wouldn’t wish it on anyone. The youth must go to school and respect the elders so they can have a good life.”

He asked the People’s Paper to send Lethabo’s details.

“What we can do is put her in our release aid. We’ll be able to assist her with food parcels,” he said.

“That’s what we’re currently doing nationally for sex workers who contact us.

“We don’t encourage sex workers to work during the pandemic, so we give them donations.”

PROMINENT ACTOR ARRESTED FOR SELLING CIGARETTES!
WHERE DOES THE 4-5 STRIKE THE MOST?
ZODWA: MY SIDE DISH IS JUST FOR FUN!
KHANYI AND BAE SPLIT!
WATCH: TRUCK DRIVING TOKOLOSHE!
Pic Of The Day
Jul 09, 2020