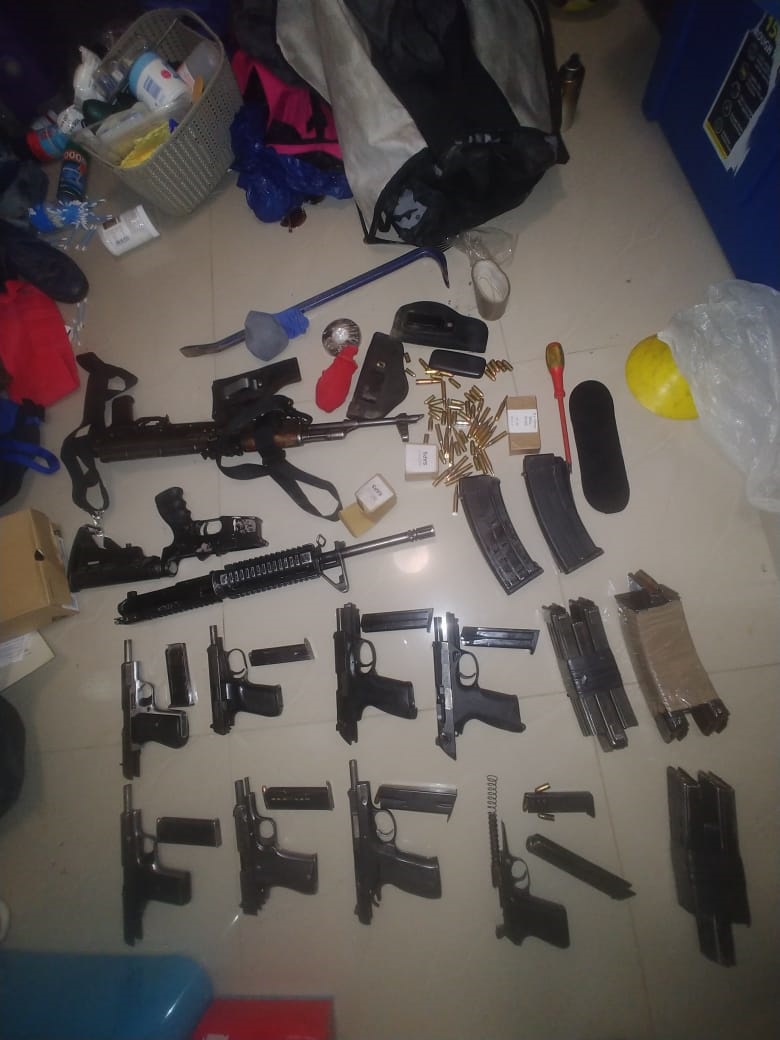 Police nabbed one of the most wanted suspects and recovered a bag with nine (9) pistols and two (2) rifles and magazines with live ammunition and a white Mercedes Benz AMG suspected to be hijacked was also found in the yard. Photos Supplied.

MZANSI cops are not sleeping on criminals during the Lockdown!

On Friday night members of the Tshwane TRT, Ekurhuleni TRT and Gauteng Traffic Police shot dead the most wanted suspect in Diepsloot, Tshwane.

According to police spokesman Captain, Kay Makhubele, the police followed an intelligent driven information that led them to the most wanted suspect.

He said the suspect was wanted on cases ranging from armed robbery, business robbery, CIT and carjackings.

“Police proceeded to the address where the suspect was hiding in Riverside View.

“Upon arrival, it is alleged they knocked on the door and the suspect's girlfriend opened the door,” he said. He said the police tactically positioned themselves around the house.

“When the suspect realised that it was the police, he allegedly fired one shot, the police returned fire and fatally wounded the suspect,” he said.

Makhubela said upon entering and searching the house, they found a bag with nine (9) pistols and two (2) rifles and magazines with live ammunition.

“A white Mercedes Benz AMG suspected to be hijacked was also found in the yard,” he said. He said there was  another multi-disciplinary operation in Johannesburg CBD were police seized counterfeit goods of shoes, takies and clothes worth 38 million rand on Friday as well.

“Gauteng Provincial Commissioner Lieutenant General Elias Mawela commended the work well done by the Gauteng police and urged the community to continue to work with the police. “ Also issuing a strong warning to those who think that the normal day-to-day police operations are at the back burner due to lockdown to think again. Gauteng is not a place to hide,” he said.

PROMINENT ACTOR ARRESTED FOR SELLING CIGARETTES!
WHERE DOES THE 4-5 STRIKE THE MOST?
ZODWA: MY SIDE DISH IS JUST FOR FUN!
WATCH: TRUCK DRIVING TOKOLOSHE!
KHANYI AND BAE SPLIT!
Pic Of The Day
Jul 09, 2020