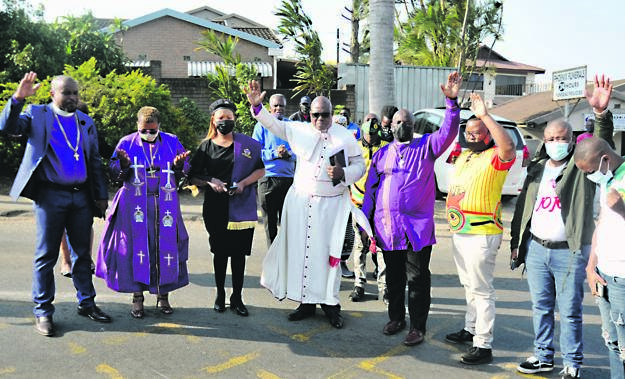 Religious leaders and other residents praying outside the Phoenix Police Station for the swift arrest of the people involved in the killings in during the recent unrest. Photo by Jabulani Langa.

RELIGIOUS leaders want justice for people who lost their lives in Phoenix.

They marched to Phoenix Police Station, north of Durban, under the banner of Black Lives Matter on Wednesday, 21 July.

This comes after several people were allegedly killed in the area during the week of riots. They handed over a memorandum of grievances. Among their demands was that those responsible for the killings be arrested.

March organiser, Bishop Vusi Dube of Ethekwini Church, said cops needed to tell them how many arrests had been made.

“Lives can’t be lost without an investigation, it will send a message that black lives don’t matter.”

Dube said the situation in Phoenix was so tense that some pastors said they were too scared to attend the march.

“Some of us came because we believe if nothing is done, it means no one will fight for the families whose loved ones died.”

Dube said they were giving the police 24 hours to find and arrest the killers.

He said they would return if nothing was done.

Chairman of the Traditional Leaders Association in KZN, Thandonjani Hlongwane, said they joined the march as the killings touched them.

“It’s worrying because our children go to school in this area.”

Thulani Gamede of Sanco Youth Congress said cops should put the same effort into catching the killers as they were in recovering looted goods.

Major-General Mandlenkosi Chirwa accepted the memorandum and said he’d hand it over to the relevant authorities.

Meanwhile, it was still unknown how many people were killed in Phoenix.

Some of the bodies had already started decomposing, which meant families would be charged extra by funeral parlours as they would have to be embalmed.

National Funeral Practitioners Association of South Africa president, Muzi Hlengwa, said he was devastated to learn there were still unidentified bodies at the government mortuary.

He said most of them were found days after they were killed.

“We’ll have to charge families more as we have to treat the bodies with chemicals to slow down the decomposition process.”

KZN Premier Sihle Zikalala said there were 38 murder cases being investigated by cops.