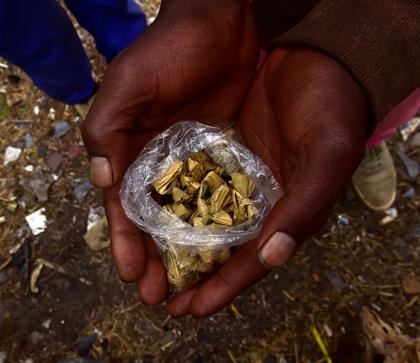 IT’S a cat and mouse games when it comes to controlling these nyaope addicts.

They were kept at bay from robbing residents of Taung, North West, by community patrollers.

But the patrollers were allegedly told to stop patrolling and it’s back to square one.

Residents are now being robbed of their cellphones and money again.

Patroller Thapelo Phoolo said ever since the local municipality told them to stop patrolling three months ago, addicts have been ruling their kasi again.

“Since we were told to stop patrolling the streets by the municipality, people have been experiencing more problems. We started the patrolling forum in 2015 and since then we were able to prevent addicts from robbing people of their cellphones and money.

“We’re about 50 in the forum and now we’re jobless because the municipality claims in can’t afford to pay us stipends.

“Even though police are patrolling the area, we did a better job of solving crime with our sjamboks,” said Thapelo.

Great Taung municipal spokesman Ricky Oliphant said: “The municipality recognises the patrollers and the good job that they did in our community.”

However, he said they were going to investigate who told patrollers to stop working.