'MY SANGOMA RAPED ME!' 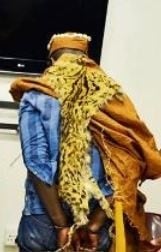 A file photo of an arrested sangoma . Credit : Daily Sun.

FOR YEARS she trusted him - and then, she claims, he betrayed her in the worst possible way.

A sangoma has been arrested for allegedly raping a 32-year-old woman on 19 August in his indumba in the CBD of Joburg after making her take a bath in herbal water.

The woman told Daily Sun she had trusted the sangoma with her money and he had told her to come and fetch it.

She said the man had invited her to come and fetch her money she invested with him.

“In my village we often invested money and gave it to someone we trusted. That’s how much I trusted him,” she said.

She said she consults every now and then but she was confused when he told her to take a bath.

“That’s not what I had come for. But I believed he saw something that needed to be washed away so I did as instructed,” she said.

“When he came into the room, he looked like an angry person. I was scared. I told him that I’m not done bathing but he clearly had other intentions,” she said.

She said he pulled her from the water, pushed a cloth in her mouth and raped her.

“He told me if I tell anyone, he will send his snakes to kill me,” she said.

“I decided to keep quiet but on 5 September I opened a case. I told myself I can’t let him get away with this. He will continue raping people. I hope the law will be on my side.”

Joburg Central SAPS spokesman, Captain Xoli Mbele has confirmed that a 37-year-old sangoma was arrested for rape at the corner of Jeppe and Simmonds Street on 15 September. He said the suspect has been on the run but on Tuesday he was caught after a tip-off from a resident. “The Investigation is under way and the suspect will appear soon in the Johannesburg Magistrates Court,” said Mbele.