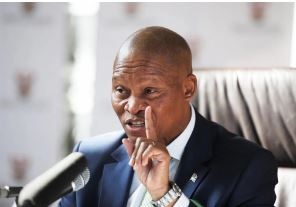 In November 2016, the chief justice, speaking at the opening of the Limpopo High Court in Polokwane said the judicial system needed to stop being reliant on paper and enter the digital age, News24 reported.

"It frustrates and delays the appeal process," he said of the current paper-based system.

It now appears that Mogoeng's vision is closer to becoming a reality.

While presenting the 2018/19 judiciary annual report in Johannesburg, on Thursday, Mogoeng said a system was being developed to enable citizens to use their smartphones as tools to check the performance of the courts.

He also said that someone had offered him R600m for court modernisation, but he rejected the offer.

"I might have mentioned it to some that I was approached by somebody offering R600m so that we can modernise, but I know that person, I know that institution (and) I rejected it with the necessary contempt, because that is how capture happens.

"We don’t want to be funded in the middle of the night, however, people may posture as benevolent givers of assistance," he said.

Mogoeng explained that they decided on court modernisation so that data relating to the registration of cases, the maturity of progression of cases from one stage to another, and reasons for delay could be captured electronically.

"An attempt to do it manually would not only be a laborious exercise, but too costly for thinly staffed courts like ours."

A pilot project has started in some Gauteng courts.

ANALYSIS:Critics of judges are raising the temperature: legitimate, or dangerous?

He said smartphones and iPads would then become tools people could use to check the performance of any of South Africa's courts. This could be done anytime, regardless of where in the world one might be, he added.

On the performance of the judiciary, Mogoeng said its challenges had been exacerbated by an increased workload.

He said the 17th constitutional amendment had resulted in an increase in the workload of the apex court.

Mogoeng said an increase in direct applications had contributed to the inability to meet the targets, adding that of the 490 cases received by the court, 370 were finalised within the last financial year.

The chief justice also said the Supreme Court of Appeal in Bloemfontein had "performed well".

The SCS managed to finalise 214 appeals of the 231 during the reporting period, he said.

Mogoeng also said the bulk of the work was done by the high court.

Of the 145 127 civil cases the court received, 114 650 were finalised and of the 13 140 criminal matters, 10 666 were finalised, despite limited resources and a judicial establishment which has remained unchanged.

Mogoeng said the country's specialist courts had ensured that matters were "expediently finalised".

This saw the Labour and Labour Appeal Courts finalising 3 756 of 5 915 matters brought to them.