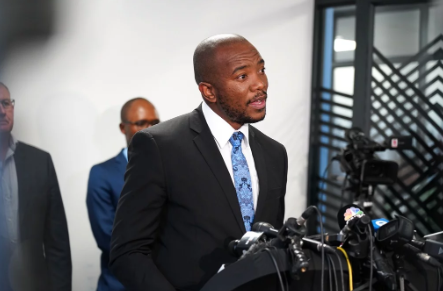 Former DA leader Mmusi Maimane has hit back at his one-time lieutenant John Steenhuisen, slamming him as a "Judas" over comments the party's interim leader made in KwaZulu-Natal on Friday.

Maimane took to Twitter on Saturday morning to defend his criticism of the ANC under its former president Jacob Zuma.

Maimane resigned as leader of the DA - and from the party as a whole - after the return of Helen Zille to a leadership position and the release of a hard-hitting review report into the party's performance in the 2019 general elections.

In the end there was nowhere to go for Mmusi Maimane, who resigned as leader of the Democratic Alliance (DA) on Wednesday afternoon. Here's what you need to know...

Steenhuisen was elected interim leader of the organisation until it hosts an elective conference later this year.

While touring the country as part of his "Real state of the nation" tour, Steenhuisen told a group in Durban that Maimane had focused too much on criticising the ANC and not enough effort on presenting solutions, Eyewitness News reported on Saturday morning.

Maimane reacted to the report in a series of tweets.

He started by saying "the previous administration was dismal" before adding, "All opposition parties were critical of the ANC under Zuma".

Maimane ends that first tweet by calling Steenhuisen "Judas Steenhuisen", seemingly in reference to Judas Iscariot, who betrayed Jesus in the Bible.

He goes on to say that the man who served as chief whip under him was "in full agreement" with the party's approach at the time.

The previous administration was dismal.
All opposition parties were critical of the ANC under Zuma.

A key element of being leader of the opposition is to show the deficiencies in the ruling party.

Judas Steenhusien was in full agreement with our approach. https://t.co/nMNlV11tUN

In a second tweet in the thread, Maimane writes that Steenhuisen should "keep my name out of his mouth", before warning that it "won't end well for him".

Maimane then tweeted a separate message, this time more veiled, simply saying "Do not mistake kindness for weakness" accompanied by a GIF of a young boy drinking from a mug.

The former DA leader posted that he had "no focus on the DA and it's [sic] current formation" but rather on "building an activist movement for all South Africans".

I have no focus on the DA and it’s current formation. I am focused on building an activist movement for all South Africans.

We have classrooms to fix, jobs to create, justice to achieve and reforms to make. I am fully focused on this work.

But let’s respect each other.

While Steenhuisen, who was continuing with his tour on Saturday, had not responded to the tweets by 12:00, Maimane certainly got people talking, including DA parliamentarian Dean Macpherson, who had his own message for his former leader.

I think it won’t end well for you. Don’t take silence for not willing to expose secrets.

Maimane's tweets drew a wide range of responses, with many people asking if he viewed himself as Jesus if Steenhuisen was Judas.

Judas betrayed Jesus. Mmusi implies that John has betrayed him. Therefore, if John is Judas; it is implied that Mmusi must be Jesus! That's some superior logic Mr Eaton! Almost as good as the old favourite about the left-handed polar bear car thief...