A video of a madala who was shot at a petrol station along Voortrekker road in Kensington.

THE community of Kensington, Cape Town, is reeling in shock after a video of a brutal murder at a petrol station on 7 October went viral.

The video shows a man wearing a hoody walking to a 59-year-old standing next to his Honda BR-V.

The two appear to talk briefly before the older man turns to his car.

That is when the young man calmly pulls a gun from his pocket and shoots him in the back. He then gets in the car and drives away, leaving the man dead on the ground.

A petrol attendant told the SunTeam they were traumatised.

“I have never seen somebody being killed in a hijacking. There was blood all over the place. I hope the killer will get caught,” he said. 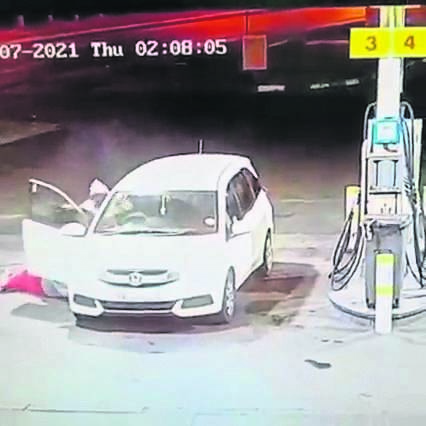 He said last month, a naked man came walking to the filling station, telling them he had been robbed by people from a taxi. They took his phone and clothes.

Resident Tarryn Olivier, who lives along the road where the incident happened, said they heard a gunshot.

“I didn’t hear another shot, so I thought I did not hear properly.

“I heard in the morning that a man was killed. I know him, and his family is devastated,” she said.

“We condemn this killing in the strongest terms possible. We call for swift justice. We urge anyone who knows anything to contact CrimeStop on 08600 10111 and help this family to see the perpetrator brought to justice.”

Police spokesman Captain Frederick van Wyk said the incident happened at around 2am.

“A man was shot and fatally wounded. The suspect got into the car and drove off. A murder and hijacking case is being investigated.”