I get my powers from Mamlambo! HE is a popular sangoma in his kasi.

And he has been practising as a sangoma for more than 30 years.

Sangoma Fanyana Hlongwane has now revealed to Daily Sun where he gets his powers from. “I get my powers from Mamlambo,” he said.

“It was Mamlambo. He told me to hold it and that it was mine. He said it will give me powers,”

Popularly known as Dr Ngaka Fanyana from Hammanskraal in Tshwane, he said he currently has three Mamlambos in his home.

“After my initiation as a sangoma, I began to feel something was missing, but couldn’t figure out what it was. I travelled across the country looking for fulfilment.

“My last journey was in KZN. The sangoma who was helping me said I was craving for a snake,” said Fanyana.

He said they spent the entire week cleansing in the ocean until the sangoma brought him a snake one morning.

“It was Mamlambo. He told me to hold it and that it was mine. He said it will give me powers,” he said. 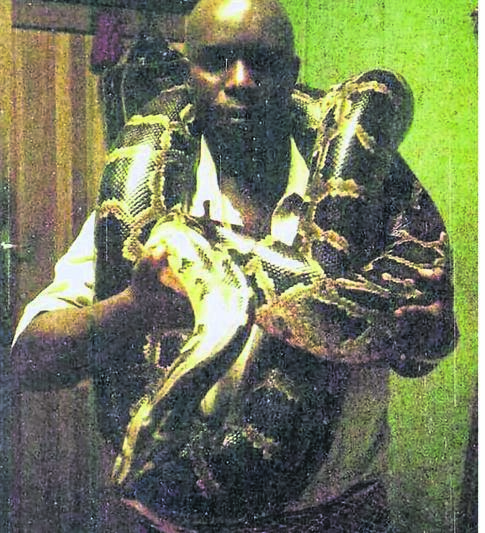 Fanyana said he has since been surrounded by snakes. He said when customers come for consultation, he first consults with his snakes, depending on their problems.

“I do not use my snakes to harm people, but to heal, help people grow their businesses, bring back their lost lovers as well as reverse a curse,” said Fanyana.

He said he slaughtered either a goat or sheep or cow as a sacrifice every year.

He said he would lose his powers if he did not make the sacrifice.

Fanyana said ukuthwala was only harmful when it was done incorrectly.

“At first, I was worried that my family members might begin to mysteriously die or it will demand them as a sacrifice, but this was never the case.

“Instead, my wife and children get along very well with my snakes.”

He said his biggest customers were prophets and business people.

One of Fanyana’s customers, sangoma Moses Mashilwane said he met Fanyana almost four years ago and his life has never been the same.

He said: “I went to consult as I had just started practising as a sangoma and things were not working out at all.

“He guided me while treating me. He is good and powerful. I still consult with him when I need help. I have grown spiritually and now have thwasas.”