GOGO SCULPTURE IS MY GUARD! 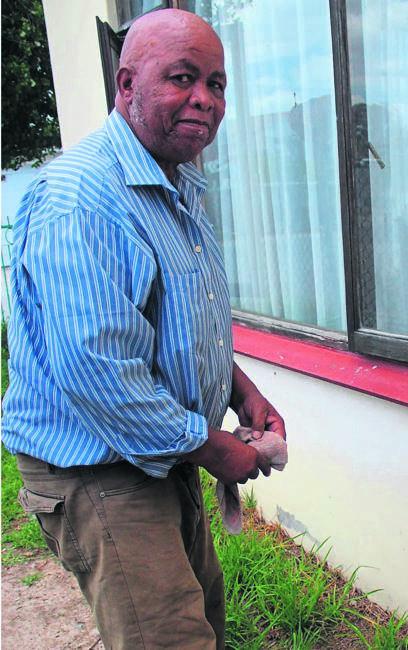 TEN years ago, Madala Nqabisile Hlewe (67) bought his concrete sculpture just for fun, but today it serves an important purpose.

The sculpture of an old gogo sitting outside the gate of his house in Philippi’s Browns Farm, with her dog and booze, guards his house.

“Sometimes people scream when they see the sculpture at night and others run away,” said madala Hlewe.

“People think it’s a dwarf that I use for security.”

During load shedding on Sunday, Nozipho Mzimane (33) who lives seven streets away came to visit the madala’s daughter for the first time.

“We work together and I needed some money. The electricity went off while I was on my way and I got there in the dark. I almost had a heart attack when I saw this creature at the gate,” said Nozipho.

“I ran away and came back with my sister. That was when I realised it was just a sculpture.” Madala Hlewe said he didn’t know what was going on when he saw a person running away from his gate.

Though it scares some people, madala is not considering taking it away. He believes even skollies would think twice before climbing his fence.

Resident Nosiphiwo Ndlela (45) said when madala first put the sculpture there she did not understand what it was.

“Kids in kasi would say madala’s house has a tokoloshe sitting outside.

“I think madala must keep it like that because anyone who wants to enter the house will think twice before going inside. The sculpture seems like it is watching you all the time. I believe if you have bad intentions at his house, you’ll definitely think twice.”