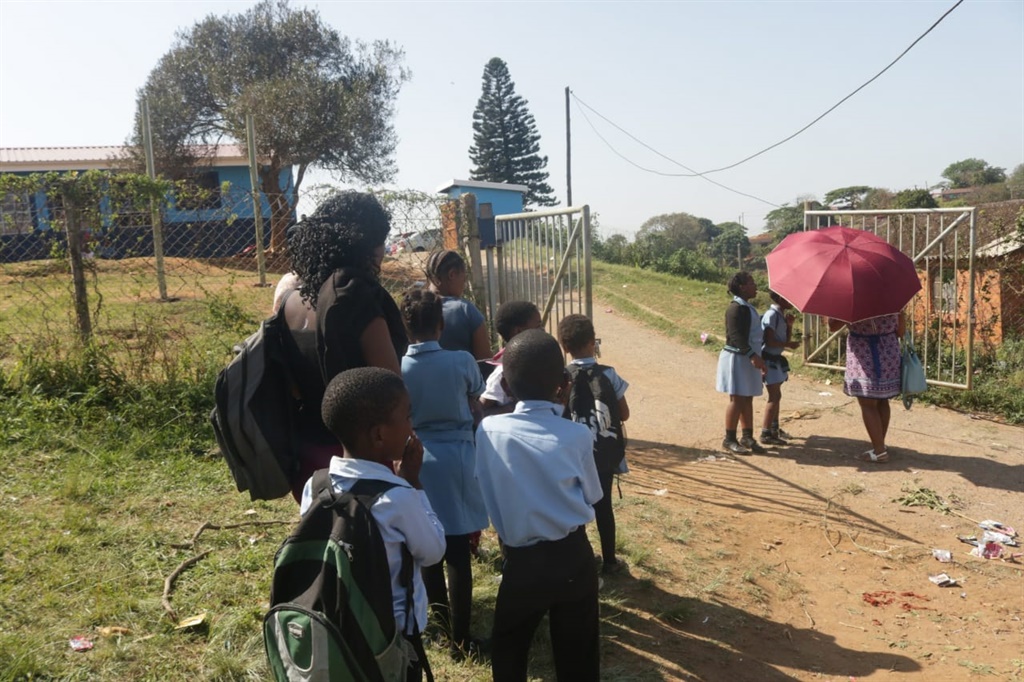 Learners leaving the school after learning was disrupted. .

Teaching and learning was disrupted at Mgijimi Primary school in uMlazi, south of Durban, on Friday.

This after parents went to the school to demand that a certain teacher who allegedly drink alcohol in front of their kids be fired.

The parents claim that the teacher goes to school when he feels like it.

They further allege that whenever he goes to the school he’d be “drunk and carrying alcohol”.

They said he started doing all these things three years ago and that they had several meetings with the school and no action had been taken again the teacher.

Parent Thembi Zondi (32) said her kids are doing grade R and three but they had told him that the teacher comes to school carrying a Smirnoff vodka and bottles of Heineken.

“He doesn’t even hide it.  Children should not be exposed to such behaviour. He also causes chaos whenever he goes to school.  He goes to school only three or four days a month, “claims Thembi.

Another parent who didn't want to be named said they are tired of the teacher and that they want the department to remove him from the school or else they will take their children to other schools.

“Our children are behind with the subject he teaches just because he comes to school when it pleases him.  We have engaged with the school and they keep telling us that the will wait for the right officials to intervene in the matter.  What kind of a lesson is he sending is he our kids?  We even fear for our children safety as he can do anything when he's drunk,” said the parent.

The Department of Education spokesman Kwazi Mthethwa told Daily Sun that they were not aware of the matter since no complaint has been brought forward by the District office to them.

"We do not want any drunk teachers in our schools that should be clear.  But in this case no complaint has ever been sent to the Department.  We are going to wait for the district office to give us the report before we can do anything.  We cannot investigate a one-sided story.  We also condemn the interruption of teaching and learning by parents.  We call on them to report the matter to the district office so that it could come to us in a proper channel, “said Mthethwa.