DE KLERK ‘AN INSULT TO VICTIMS OF RACISM IN SA’ 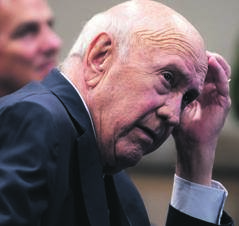 IN the midst of anti-racism protests sparked by the death of George Floyd, the American Bar Association (ABA) has drawn criticism over its announcement that former president FW de Klerk will speak about “rule of law, constitutional democracy, minority rights, social change, racism and global security” at its 2020 Virtual Annual Meeting.

Among those who’ve appealed to the ABA – which describes itself as “the largest voluntary association of lawyers in the world” – to reconsider De Klerk as a speaker are Lukhanyo Calata, the son of slain anti-apartheid activist Fort Calata, former Truth and Reconciliation Commissioner Dumisa Ntzebeza, and Howard Varney, who worked with the TRC. The Pan African Bar Association of South Africa (Pabasa), which recently expressed its outrage over “the brutal murder of George Floyd”, has also condemned the ABA for providing De Klerk with a platform to speak on racism.

Pabasa stated the invitation was an “insult” to families like the Calatas, whose loved ones were murdered in state-sanctioned killings, it said De Klerk was implicated in.

Asked by News24 to explain why it had chosen De Klerk, the ABA’s Bill Choyke said the association would only be in a position to respond on Tuesday.

De Klerk’s spokesperson Dave Steward said he’d only comment after communicating “with the organisers in the US”.

In a press release about De Klerk’s upcoming speech at its “empowerment-themed” conference, the ABA described the former president as having “negotiated with Nelson Mandela to bring the apartheid system of racial segregation to an end, ushering in majority rule”.

But that’s not how De Klerk’s critics view him.

Calata, Ntsebeza and Varney have taken issue with what they described as the former president’s failure to take responsibility for his complicity in apartheid-era atrocities.

This, including his assertion during an interview with the SABC in February that apartheid wasn’t a crime against humanity.

The FW de Klerk Foundation later said he expressed regret for “the confusion, anger and hurt” his remarks might have caused.

But Varney said De Klerk has repeatedly stated “apartheid was not so bad”.

“If he had the courage and statesmanship to admit his role and that of the National Party honestly, then he would deserve such a platform,” Varney states in an email to the ABA.

“Since he persists with his charade of denial and ignorance he certainly does not. I urge you to replace this event with one that looks seriously and honestly at racism in South Africa and the role of key stakeholders, such as De Klerk.”

In his response to ABA’s invitation to De Klerk, and in apparent reference to growing global anti-racism protests, Said Ntsebenza: “Now is not the time for De Klerk to talk on any public platform that purports to promote the rule of law, nor is the ABA the platform that should give De Klerk any legitimacy.”

Calata has appealed to the ABA to reconsider its decision to invite De Klerk, who he maintains was complicit in the 27 June 1985 state-sanctioned murders of his father and fellow teachers Matthew Goniwe, Sicelo Mhlauli and Sparro Mkonto. “De Klerk was involved in the machinery of violence against black people in South Africa and countless black lives were snuffed out while he sat on the SSC and during his tenure as president.” – News24

The men became known as the Cradock Four.

He said: “Despite all the evidence of De Klerk’s knowledge and involvement in the murders, he has always hidden the truth about what his contribution was to the meetings in question and what he knew then and now about the murders of my father and his comrades. A secret I’m sure that he plans to take to the grave with.”

In his e-mail to the ABA, Varney reiterates this assertion: “De Klerk declares that he is ‘not prepared to accept responsibility for the criminal actions of a handful of operatives of the security forces...’ In fact, he was part of the apparatus at the very top that made those atrocities possible.