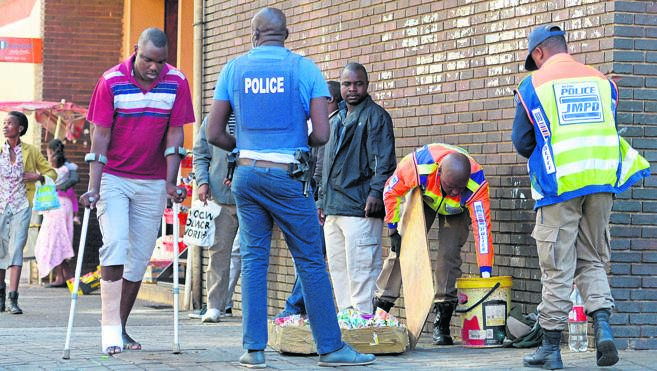 COPS had a busy day in Jozi on Monday and yesterday.

They arrested a number of undocumented foreigners during a 48-hour raid that started earlier this week.

They seized illegal ammunition at run-down buildings and scrapyards in Rosettenville.

Witnesses told the SunTeam they were happy to see cops acting against people who didn’t have correct documentation and broke the law.

Hillbrow resident Christina Maibe (44) said: “They must do this daily. We’re tired of crime.”

Hillbrow cops spokesman Captain Musa Shihambe said they were planning to sweep more criminals off the streets of Jozi.

“We were working as teams. Soweto East and West assisted the Moffatview cops,” said Shihambe.

He said five illegal scrapyards which cops found would be raided soon.

“The owners were not there, but we plan to take action soon,” he said.

“I hope this will serve as a warning to those who think they can commit crime and get away with it.

“We’ll continue to work overtime until our streets are clean.

Shihambe condemned criminal behaviour, especially after the xenophobic attacks that flared up in Joburg last week.

“The police are in the business of fighting crime,” he said.

“Operation Okae Molao continues to rid our communities of acts of crime.”

Anyone with info on hijacked buildings being used by tsotsis should call 0800 002 587.