ANCESTORS SAVED ME FROM BULLET! 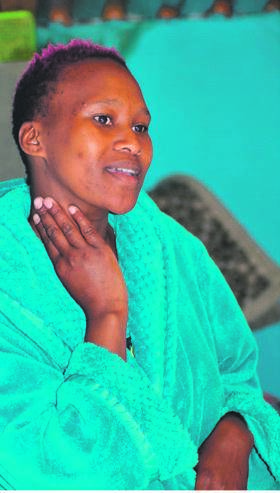 Ayeza Kwaza said all she thought about when the shooting happened was her son, who was playing outside. Photos by Lulekwa Mbadamane .

AYEZA Kwaza believes God and her ancestors have plans for her life.

The 27-year-old from Ramaphosa squatter camp in Cape Town, narrowly survived being hit by a stray bullet on Saturday.

Ayeza said she was in her shack with her boyfriend when she heard bullets hitting the walls.

“I heard some shooting, but it didn’t sound like it was close by.

“My child was outside, so I became concerned and wanted to call him to come inside,” she said.

“When I went to call him, I heard something hitting my cupboard. When I checked, I found bullet holes.” Ayeza shows the bullet hole in her cupboard.

She said her boyfriend told her to take cover in case the shooting continued.

“I refused and rushed outside to check on my child. I didn’t care about my life at that point,” she said.

Ayeza found the bullets had gone straight through to her neighbour’s shack.

“At least my kids and I were not home when the shooting happened. The bullets could have killed us,” she said.

Ayeza said she didn’t bother to go to the cops.

“There is no point because no one was hurt. It’s only that I’m scared that such things will keep happening,” she said.

Community leader Nhlanhla Kamuteni said crime was a big problem in the kasi and he was worried that it was getting worse.