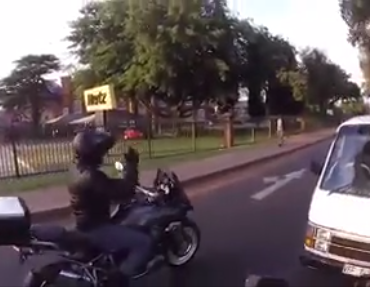 THE Johannesburg Metro Police Department has arrested a taxi driver that was filmed in a viral video driving into oncoming traffic.

The taxi driver was driving into oncoming traffic on Sloane Street in Bryanston.

According to the JMPD the driver has been charged with reckless and negligent driving.

He has been held in custody at the Sandton SAPS.

In the video, the Biker who has been identified as Sean Nysschen can be seen stopping in front of the taxi that was driving in the wrong lane.

Following that the biker instructs the taxi driver to drive back to join the correct lane, which is conjested.

Nysschen told News24 that the driver complained that his clutch was not working properly and that he needed to get to the top of the road.

"He kept saying: 'Smell the clutch baba, smell the clutch,' but I just would not let him through. He was putting other people's lives in danger."

Nysschen said he has sent "countless" videos of similar incidents to the Johannesburg Metro Police Department (JMPD) but the situation remained the same.