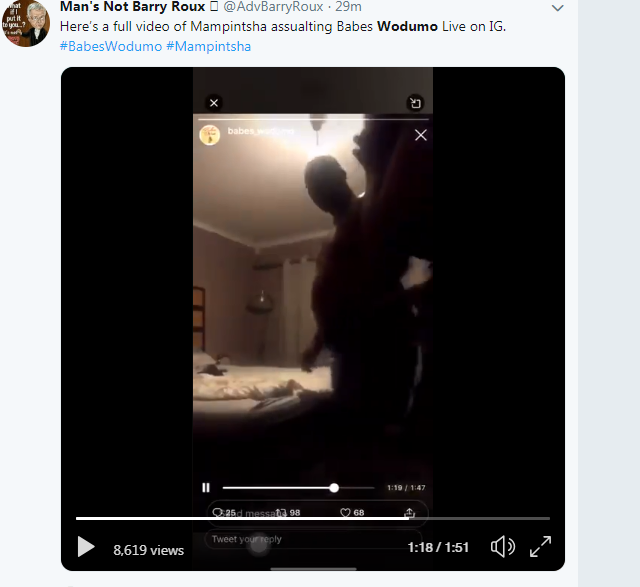 A VIDEO of Gqom star Babes Wodumo being assaulted by Mampintsha has surfaced on social media.

The video has angered a lot of people on twitter.

The video appears to have been a live feed on Instagram by Babes Wodumo.

It has now being shared all over social media.

In it, Babes could be heard saying something and then Mampintsha quickly moves to beat her up.

Babes could be heard crying.A lot of people are condemning Mampintsha on Twitter.

It is not the first time that Mampintsha has been accused of beating up Babes.

Good Morning to everyone except for those people who said nye nye nye & bashed Masechaba Ndlovu when she tried to help Babes Wodumo look now she’s getting beat live on Instagram, Go & get your Good Mornings from Mampintsha. #Masepa

The way Mapintsha was quick to react when Babes Wodumo said those provoking words on purpose knowing too well what's gonna happen next...he showed no remorse, hitting her straight to the head. Like if she dies she die????.

I'll be very upset if I don't hear of mampintsha's arrest within the next 24 hours. This babes wodumo live video has me shook??