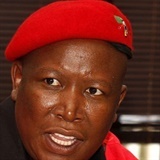 In an interview with Anele Mdoda, on SABC 3's Real Talk with Anele EFF leader Julius Malema said he does not hear white people when they speak. Malema says that lately his wife Mantoa Malema forces him to go to the movies and his only challenge is hearing anything they say and when he asks "what are they saying" he is called to order with a "sshhh".

When asked why he does not watch black movies he says the movie industry is dominated by white people.

Malema says he has a white friend called Andriano and every time he speaks he has to repeat himself or slow down.

"The reason why I don't hear them is because I've never gone to school with white people or socialized with them" he says.