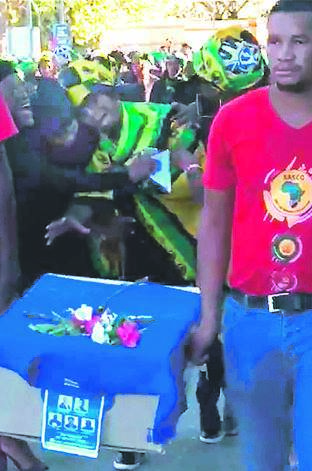 A video of a DA funeral staged by the ANC is circulating on social media.

Wailing mourners in ANC colours followed behind. Draped over the coffin was a DA cloth.

The staged video shows a group of ANC mourners singing Noyana Phezulu as the ANC chief mourner struggles to contain her tears.

Information about who staged the fake funeral and where it was held is still not available.

The video was accompanied by comments from Many social media users laughed at the video.

But some commentators didn’t find it funny.

Some said they felt sorry for ANC supporters who were hanging on to a party that has given them nothing but empty promises.

“Our government has pensioners working while young people are consumed by substance abuse. Yes, the video is funny but the reality is, the struggle still continues,” said Siyabonga Shabalala.