MY BUM SCARES OFF CROCODILES! 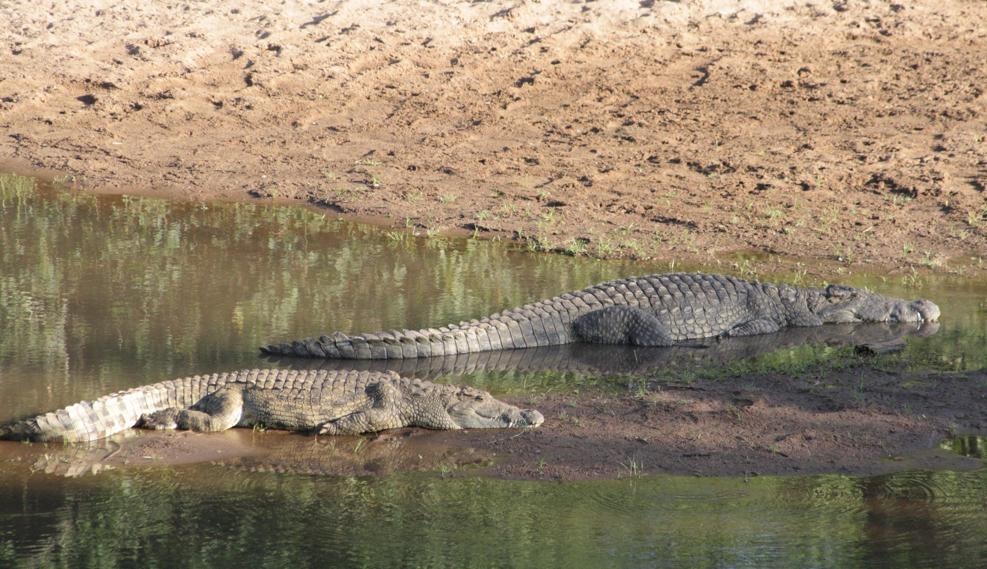 These crocodiles in Luvhuvhu River were photographed some time ago by the SunTeam. Left: Million Gume shows how he makes the dangerous creatures go away when he is in the water. Photo by Mzamani Mathye .

EVERY day Million Gume risks his life by swimming in a river full of crocodiles . . . but he is not scared.

He just flashes his bum at the crocodiles and they go away.

“I’m the king of the bum swim,” he laughs and demonstrates by diving into the water and sticking his naked bum in the air.

Million (30) of Mhinga Village in Malamulele, Limpopo said he’s been swimming in the Luvuvhu River for five years.

The rivers in the area are known to have many crocodiles and many locals have lost their lives in the dark water.

He told Daily Sun: “The crocodiles are scared of me!

“When I jump into the water and realise that the crocodiles want to attack me, I just show them my bum and they move away.

“I then carry on with my famous bum swim.”

He said people who come to the river enjoy watching him.

On Wednesday afternoon the SunTeam saw Million playing in the river.

He floated with his head and upper body underwater like a drowned person.

He then disappeared under the water and after a short-time only his bum appeared.

George Matiyani, headman of the Mhinga Tribal Authority, said Million must watch out.

“The crocodiles aren’t scared of his bum.

“ They will drag his bum into the deep waters and chew him up,” he said.

Matiyani warned the kids to stay away from the dangerous rivers in the village.

“The most recent victim was fisherman Thinashe Hove, who was attacked on 24 January. And the body of a 45-year-old man who was killed last month hasn’t been found yet.”