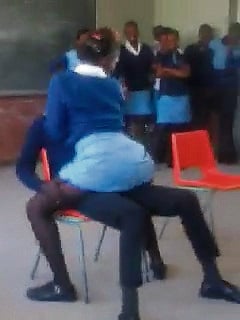 A screengrab from a raunchy video which has gone viral on social media. .

SHE has all the skills, but she is showing them off in the wrong places.

A raunchy video of a schoolgirl giving a boy a lap dance in school has gone viral on Facebook.

In the video, the boy is sitting on a chair in a classroom while the girl dances over him.

They are both in school uniform, but there is no indication of where the school is. Pupils are seen cheering and laughing in the background.

Many Facebook users have said the increase in sexy videos from schools proves many pupils are having sex.

On Facebook Thabile Tununu said: “A shout out to all my sisters: Carry yourselves in a manner you would like to be treated. You can’t be showing off all your goodies and get mad when men want to touch your body.”

Jasmine Ernest said: “Why must I pay school fees for my child to do that. I would honestly hurt her.”

Others saw nothing wrong with it and even complimented her skills.

Lolo Byco said: “Leave the poor girl alone, she owes you nothing. She’s not smoking or drinking alcohol. She is just entertaining the class.”

Steve Mabona, the Gauteng Department of Education spokesman, said they could not identify the school, but they were deeply concerned about the conduct of the pupils.

“The department strongly condemns any misbehaviour in schools.

“Serious action could be taken against those involved.

“We have a policy of zero tolerance to any form of misconduct and anyone found to be in transgression of this policy will be dealt with in accordance with the South African Schools Act,” he said.

He also appealed to parents to enforce discipline within and outside the school environment.

WE FIND RHULANI IN THE ABC MOTSEPE LEAGUE
WATCH: I MARRIED 6 WIVES, 8 TO GO!
Makhi demands Sex!
Husband seals wife's punani with glue after cheating
#BET-YOU-DIDN'T-KNOW THEIR STORY...
Pic Of The Day
Feb 19, 2020

Pic Of The Day State of The Nation address in parliament with President’s guest.