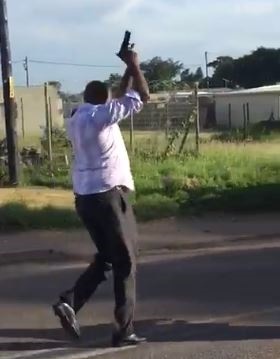 Six men in the private security industry have been arrested after videos emerged on social media of them discharging their firearms randomly in public, Kwazulu-Natal police said on Friday.

In the first shooting in Molweni, Hillcrest, three men are seen firing their guns in the air in a populated area as they walk down a road to their private security vehicle.

Some women scream and a gathering crowd soon cheers them on. The men laugh and pump out more bullets before getting inside the vehicle.

"Their firearms, suspected to have been used during the random shootings at Molweni recently, were also seized and will be subjected to ballistic tests to establish if they were used in the commission of any other crimes."

The men were expected to appear in Pinetown Magistrate's Court on Friday. In a similar case, three body guards were accused of discharging their firearms during a public meeting in Howick on Monday. Men in plain clothing are seen in a video clip holding their firearms at their sides during a stand-off with an angry crowd. Gun shots can be heard. Zwane said the men were arrested and charged a few days later. They appeared in the Howick Magistrate's Court on Thursday. The accused are Florian Ngcobo, 43, Wellington Bhengu, 48 and Sbusiso Zuma, also 48.  The case was postponed until May 17.

Acting provincial police commissioner Major General Bheki Langa and his team condemned the incidents.
"We will not tolerate such behaviour by people who randomly discharged their firearms, whether at funerals, meetings or any other functions. I commend our police officers who acted swiftly and have arrested those who were involved in (this) unlawful behaviour."

Another day, another public display and discharging of guns in KZN. These men are said to be from a private taxi management unit. SAPS’s Thulani Zwane tells @eNCA the incident happened near Hillcrest (around Wyebank) last weekend, after the funeral of a taxi owner pic.twitter.com/Gvf4DBmLUv