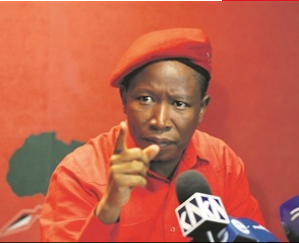 EFF leader Julius Malema is to be summoned by the South African Human Rights Commission (SAHRC) to testify at its inquiry into the Alexandra protests, for encouraging his supporters to illegally occupy land.

The inquiry was formed after Alexandra residents embarked on violent protests in the township in April demanding improved services.

The decision to request Malema's attendance was made after Gauteng Human Settlements MEC Uhuru Moiloa completed his department's testimony at the commission's head offices in Braamfontein, Johannesburg on Wednesday.

"We will extend our invitation to the EFF [leader] to appear during our next sittings," said SAHRC spokesperson Buang Jones.

While EFF commander-in-chief Julius Malema welcomes calls for his party to be investigated over allegations that it was involved in the collapse of VBS Mutual Bank, he insists the claims were intended to destroy the party.

Without mentioning names during his testimony, Moiloa complained about "a leader of an opposition political party, who calls for citizens to occupy land".

On May 3, outside the Bloemfontein Magistrate's Court, Malema again called for people to occupy land, EWN reported. It has been a recurring theme espoused by the EFF leader since the party's inception in July 2013.

"His call of driving people to occupy land in an urban setting is an abuse of human rights of others. What are the future consequences of controlling sanitation? It puts vulnerable people in a complete

inhumane environment, instead of living in the backrooms where they can wait for proper houses from government.

"It is your call and you can invite him. You know who I am taking about. What kind of statements should be acceptable for politicians to make?" Moiloa asked.

The MEC claimed that empty pieces of land in the south of Johannesburg and Alexandra had been illegally occupied since the call to occupy land was made.

Moiloa also told the inquiry that a project to build more homes will be initiated in the province. Each project is expected to deliver 10 000 housing units in the next 10 to 15 years.

"In one mega-human settlement, we expect to have a police station, primary schools, high school, clinics and recreational facilities," he said.

The inquiry was adjourned until June 4.