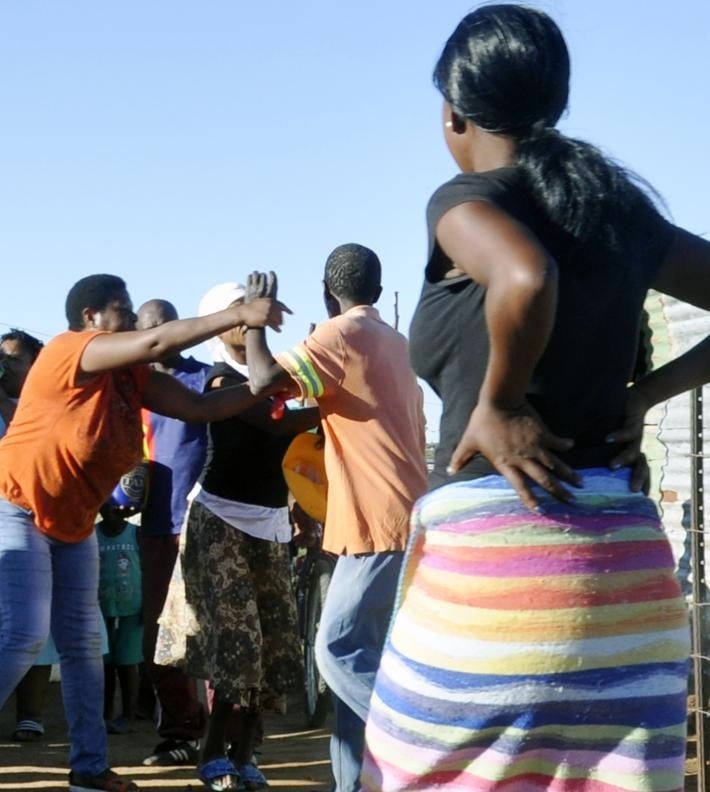 The madala gets a beating from kasi women after they accused him of wanting to poke an 18-year-old. Photo by Kabelo Tlhabanelo .

HOT klaps and angry words flew when a group of gatvol women beat up a madala and a young woman (18), accusing them of adultery!

The incident that set the tongues wagging happened in Caleb Motshabi kasi in Mangaung on Saturday.

The women told Daily Sun they were sitting together drinking booze when the young girl started to flirt with the old married man (66), flashing her punani while pretending she was dancing.

The women claimed the madala got tempted and left with the young woman for a local field, thinking everyone was drunk and would not notice.

“But some of us were not drinking and were aware of their move.

“As soon as the pair disappeared, we followed them.

“We stopped them before they could poke,” said one of the angry women.

The madala’s wife praised the women.

“My husband finally got what he deserves. He has cheated on me so many times and I kept forgiving him,” she said.

The wife (51) said her husband was abusing her emotionally with his many girlfriends and she was happy that he received a beating.

When Daily Sun arrived the women were shouting at the young woman while beating her: “Why don’t you become a prostitute and do your business in the streets? You will not come in our kasi and break up marriages!”

The woman denied their accusation.

She said: “The man took his bicycle and went home. I also went that way, but these women think I was following him. I am too young to poke that madala.”

The madala said: “These women are accusing me of something I did not do.

“I am going to open a case against them on Monday.”