Photo: Gift of The Givers.

The organization says there has been no disagreement with the Makhanda Municipality.

“On 9 February the municipality requested our assistance and said in five days everything will be back on line in terms of water supply. Gift of the Givers intervened on 12 February and explained to the municipality the extent of the problem was far greater than anyone envisaged. “We drew up a rescue plan and commenced the process of "saving the city" immediately. We advised the municipality that the cost to solve the problem will be in the region of R23 million and that this will require government funding,” Dr Imtiaz Sooliman said in a statement on Thursday.

He said municipality said the area had been declared a disaster in the government gazette and they would receive emergency funding with which they will remunerate Gift of the Givers.

The Gift of the Givers drilled 15 boreholes, tested the water and brought in special filtration systems, delivered bottled water and water by truck. According to Sooliman costs were rising daily, thus far the intervention has cost R15 million.

He stated that the Department of Water and Sanitation (DSW) started engaging us.

“But the best came from DSW on Freedom Day, when President Cyril Ramaphosa, was addressing the nation. 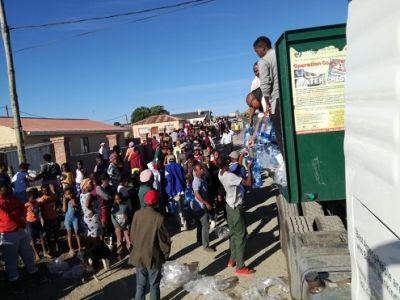 Sooliman stated that this week they received the most incredible feedback from DWS, they said only companies from Grahamstown could be paid for the drought intervention. Sooliman said this is R10 million of taxpayers’ money handed out freely by the government to people as remuneration for work that Gift of the Givers did.