Theo Nyhaba
Uitgawe Lizelle was afraid she would be killed! 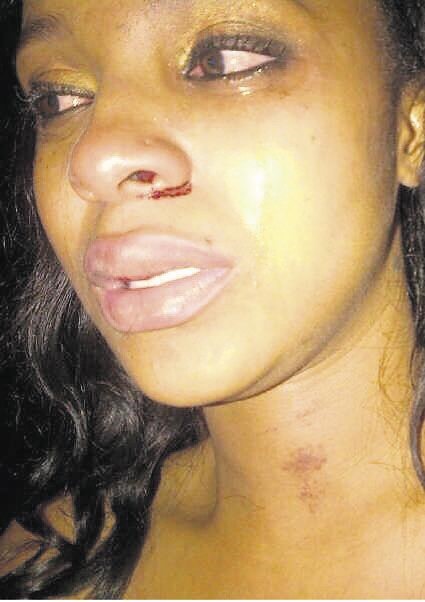 Her lovely photos have appeared on social networks . . .

BUT NOW THERE ARE SHOCKING IMAGES OF A BRUISED AND BLEEDING LIZELLE!

In these pictures, taken two years ago, she has a cut on her forehead, a huge bruise on her left eye, a bleeding nose and blue marks on her neck.

A police officer, who spoke on condition of anonymity, confirmed he was one of the cops called to Teko’s house at Ruimsig in Gauteng a year ago after the most recent incident.

“Lizelle claimed her husband was beating her for no reason. But when we got there, she quickly changed her mind,” said the Roodepoort police officer.

Another source, who used to date a soccer player, claimed that wasn’t the first time Lizelle was beaten.

Our soccer mole claimed the former model once confided in her that Teko had assaulted her.

“We told her to go to the police, but she made excuses for him,” the source alleged.

The source claimed that Lizelle has not complained in a while, saying: “Well, we’re no longer friends, so I don’t know what’s happening. Maybe he’s stopped – or she’s stopped provoking him.

“We don’t know, but you know us girls – we’re good at hiding things,” said the source.

According to the informer, Lizelle took the pictures about two years ago and she has kept them as evidence.

The source claimed Teko would beat her up for no reason.

“Sometimes she would tell us he would just get angry and punch her. She once called me, afraid that he would kill her.

“Lizelle told us that on the night of the last incident one year ago, they had just come back from a night club when he started punching her.

“He then pushed her to the floor and she chipped her tooth.

“As a woman, it’s not nice when another girl is being abused.

“We told her to call the cops, which she did. But when they got there she told them it was just a mistake.

“When the officers questioned Lizelle about the injuries, she told them she had provoked him,” claimed the source.

Our mole also claimed: “She has been linked to many guys so many times and he would hear about it and lose his temper.”

Another source, who is close to Lizelle’s brother, told Sunday Sun: “One time he beat her up and she ran into a room and locked herself in. She was frantic when she called her mum and brother – they were too far away and couldn’t help.”

Teko could not be reached for comment and his manager, Jazzman Mahlakgane, insisted that he doesn’t comment on his players’ personal matters.