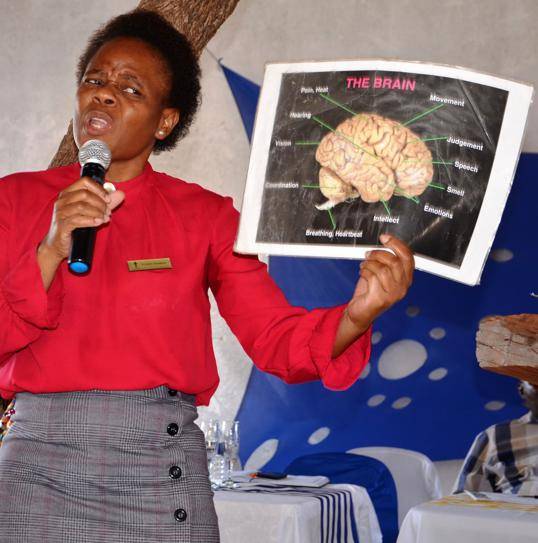 Flossy Ngobeni-Sithole shows the chart of a healthy brain. Photo by Oris Mnisi.

KIDS pay attention to what parents do, not what they say especially when warning them about drugs.

Flossy Ngobeni-Sithole of the South African National Council on Alcoholism said 41% of kids use drugs for fun, 21,9% for stress, and 19,9% experiment.

She was speaking at the Bushbuckridge men’s forum in Cottondale, outside Acornhoek in Mpumalanga, on Thursday.

Ngobeni-Sithole said kids get zol, ecstasy, cocaine and booze from friends or dealers near their school.

“About 19,6% of children use drugs due to a poor relationship with parents, while 16,8% are those who lost friendship, and 20% are those who consider suicide,” she told Daily Sun.

“Drugs affect kids’ brain development and, as a result, its pleasure centre matures before the part of the brain responsible for impulse control and decision-making.

“This means teenager’s capacity for pleasure reaches adult proportion before they have capacity to make good decisions.

“They become victims of violence and crimes and engage in risky behaviour, resultingin poor academic performance.

“They also have depression, anxiety and may attempt suicide.”