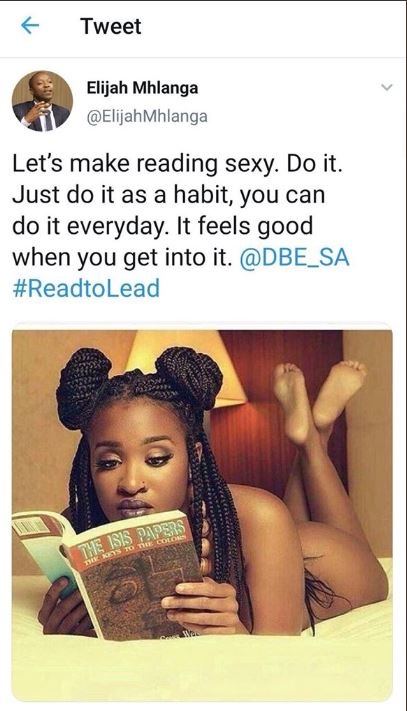 The Department of Basic Education Spokesperson Elijah Mhlanga has apologised for some tweets that had raunchy pictures that he says were to promote reading.

The tweets were part of a thread in which he used the hashtag Read to Lead.

In the tweets, Mhlanga encouraged people to take some time to read. Some of the tweets had what people said were NSFW (Not Suitable For Work) pictures.

They were captioned with messages like "Drop all and read, once a day, pause other activities and read. Readers are leaders, they say. @DBE_SA #ReadtoLead"

Drop All and Read, once a day, pause other activities and read a book. Readers are leaders, they say. @DBE_SA #ReadtoLead pic.twitter.com/ZhigfOsyec

He followed that one up with an even NSFW picture captioned "Reading for leisure is also therapeutic. It relaxes the mind, body and soul. @DBE_SA #ReadtLead.

Reading for leisure is also therapeutic. It relaxes the mind, body and soul. @DBE_SA #ReadtoLead pic.twitter.com/gPUhlqUf5v

Equal Education tweeted "The highly inappropriate Tweets below objectify women. @ElijahMhlanga, the right thing to do is delete & unequivocally apologise. Reading we should all do:

The highly inappropriate Tweets below objectify women. @ElijahMhlanga, right thing to do is delete & unequivocally apologise. Reading we should all do:
The Will to Change: Men Masculinity & Love(Hooks) We Should All Be Feminists(Adichie) Sister Outsider(Lorde)@DBE_SA #ReadToLead pic.twitter.com/SAKNJdYqBh

The Basic Education Minister Angie Motshekga has also distanced the department from Elijah tweets. According to SABC News, Motshekga has ordered appropriate action to be taken. The Basic Education in a statement said that while it commends initiatives to encourage learners to read more, it doesn’t agree with the use of sexualised images of women to decorate campaigns.

Mhlanga only took down one tweet but left out two above.

The tweet he deleted showed a woman on a bed reading a book seemingly naked. The caption read "Let's make reading sexy. Do it. Just do it as habit, you can do it everyday. It feels as good when you get into it"

Mhlanga has since apologised. In a series of tweets Mhlanga noted one particular image may have offended some people.
"This however, was not the intention and we strongly reject any view to that effect. To those I disappointed and indeed those of you who are offended by the use of the images I apologize

On Saturday, I posted a series of tweets about the Department's Read To Lead Campaign aimed at promoting reading amongst young adults and people of school going age and society in general.

He continued "I have previously promoted this reading Campaign on Twitter using the same images in 2016, 2017 and 2018 however, there was no discontent or discomfort raised at the time. In fact it started a discourse on reading"
"Contemporary audiences that consume media tend to be open about sex and sexuality. I therefore have a full understanding of representation and metaphoric content," Mhlanga tweeted.
Mhlanga acknowledged that he pushed the boundaries. "I pushed the boundary slightly in order to play around with meaning, and push a narrative about reading as an activity that can be done for fun and leisure," he said.