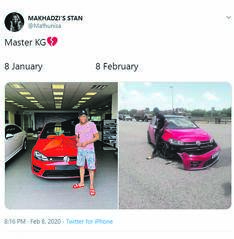 The tweet that seemed to show Master KG had an accident.

JERUSALEMA hitmaker Master KG was involved in an accident on Friday, but he’s doing fine.

Lionel Jamela, co-owner of KG’s label Open Mic Production, confirmed there was an accident but didn’t have all the details.

“I don’t have all the details about what happened because it was a minor accident.

“It was just the bumper, nothing more. This happened on Friday before he left for his European tour.”

He said no one made a big deal out of it because KG was fine.

“This happened during a happy time while we were celebrating Jerusalema going platinum, so we didn’t make it anything major. All that matters is that he’s fine and he was able to get onto a plane. He is healthy and entertaining people abroad right now,” he said.

The news was shared by Twitter user Mafhunisa on Friday. He said KG was involved in an accident just a month after buying a car and posted a photo of the damaged bumper.